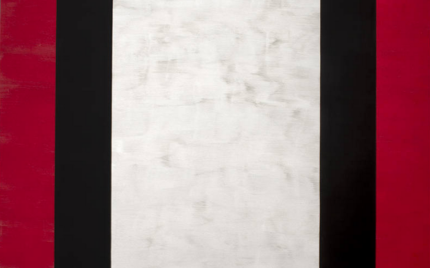 Mary Corse (b. 1945) was one of the few women involved in the 1960s-and-on Southern California art movement called “Light & Space,” which typically featured ultra-minimal architectural environments instead of more conventional art objects such as paintings and sculptures. Ms. Corse has, however, chafed in print at being lumped in with that male cohort, and at criticism seeing it as having influenced her work. In any event, in 1968 she discovered glass microspheres, the reflective pellets that make highway lines and street signs glow in your headlights, and mixed them into her paint. She didn’t so much move away from Light & Space art as incorporate its challenge to visual perception itself into abstract painting.

On the surface (pun intended), there’s not that much in Ms. Corse’s large (90- to 102-inch wide) canvases: vertical bands of white, black and often one primary color. But Ms. Corse’s art is exceedingly “smart” in that way that collectors, curators and critics enjoy if they’re attuned to her kind of aesthetic intelligence. The edges are beveled inward so that the paintings seem to float slightly off the wall; the brush strokes in the reflective stripes vary to reward closer looking; and the contrast of emphatically microsphered colors to the more matte blacks is well played. In short, there’s a feeling of just-rightness to Ms. Corse’s paintings.

Mitigating this near-perfection—just a bit—is the questionably chosen hue of a bloody red (Ms. Corse’s blue and yellow are more primary), and a dozen works in the show when half that would have given her paintings needed meditative space. Nevertheless, this is one of the best gallery painting exhibitions in a long while.

www.wsj.com
Back To Top