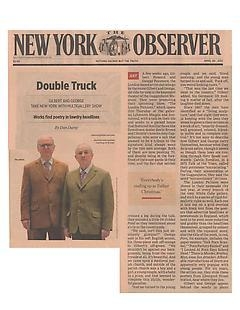 A few weeks ago, Gilbert Proesch and George Passmore, the London-based artist duo who go by the name Gilbert and George, sat side-by-side in the basement theater of the Guggenheim Museum. They were promoting their upcoming show, “The London Pictures,” which opens this Thursday at the galleries Lehmann Maupin and Sonnabend, with a talk on their life and works to a packed house that featured familiar faces like Downtown dealer Gavin Brown and Christie’s honcho Amy Cappellazzo, who wore a suit that seemed to be a tribute to the signature kind always worn by the two men onstage. Both of them are now pushing 70, and despite being at the forefront of the avant-garde in their time, and the fact that neither crossed a leg during the talk, they sounded a little On Golden Pond as they reminisced about a trip to the countryside.

“We said, isn’t this just absolutely glorious?” George said in his soft English accent, his three-piece suit off-orange to Gilbert’s off-green. “We shouldn’t be against our backgrounds, being from the countryside at all, it’s beautiful. And we came upon a medieval parish church, and outside of the parish church was a boy and a girl, a young couple, with a baby in a pram, and that seemed to complete this idyllic, wonderful paradise.

“And we turned to the young couple and we said, ‘Good morning,’ and the young man turned to us and said, ‘Fuck off, you weird-looking cunts.’”

“That was the last time we went to the country,” Gilbert added, his Germanic lilt making it matter of fact, after the laughter died down.

Since 1967 the men have identified as a “living sculpture,” and that night they were, in keeping with the laws they wrote to govern their actions as a work of art, “smartly dressed, well groomed, relaxed, friendly, polite and in complete control.” It’s not easy to describe how Gilbert and George carry themselves, because what they do is not satire, though it seems as though these laws are running through their heads constantly. Calvin Tomkins, in a 1971 Talk of the Town, called their politeness “excruciating.” During their presentation at the Guggenheim, they said the word “extraordinary” 14 times.

Gilbert and George appear behind the words in photo negative, as they do in most of their two-dimensional works, though while most of their best-known wall pieces look like garish stained glass, the gestalt for the London Pictures is black-and-white, rife with CCTV-style images of English streets. It’s anti-anarchy in the U.K., down to the currency image of the queen in the lower right of every work, though during an interview at Lehmann Maupin Gallery the day after the Guggenheim event, George insisted that the two are “Western” artists more than they are English ones.

“The posters enabled us to address subjects that would be very difficult with any other forum,” George said, seated on the visitors side of a desk next to Gilbert, as though in a two-man job interview (which is fitting, as the two men consider themselves to be a single artist). “Try to start drawing ‘rape,’ or ‘pedophile.’ How would you do it? It’s impossible. Even if you started writing about it, it would be very patronizing. This is some sordid reality.”

“Sordid reality,” Gilbert agreed. “And then we made the images look journalistic in some way, poor quality. They are just a reflection, ghostlike, we call them, but behind it. Just like a spirit of London. The perfect image of memory.”

“Though you can’t compete with the text,” George continued. “We can’t come up with as powerful an image as the text. None of the images come over the text, and the text is always on top, that’s one of the rules.”

“Because that’s the number that the piles of posters dictated,” George said. “There were 3,712 posters, and if you divide them into subjects, you automatically get 292.”

However compelling the London Pictures are, any Gilbert and Georges available to buy will always be secondary to the work of art that is the two men. They met as students at St. Martin’s College and as far as anyone can tell have been inseparable since then. Some of their earlier work involved sending postcards memorializing moments spent together—postal sculptures, in their estimation. Their breakthrough piece was The Singing Sculpture, first performed in 1970, which had the two of them crooning the vaudeville ballad “Underneath the Arches” for hours at a time, standing on a table in metallic makeup, and their suits. The dealer Konrad Fischer, who invited them to make the statue at his gallery in Düsseldorf, wanted something he could sell so they made some big charcoal-on-paper sculptures and priced them at 1,000 pounds apiece, hoping to shock with the audacity of the price. They all sold the next day. “And after that we did a drinking sculpture!” Gilbert said, after he’d recounted the story at the Guggenheim.

“Gilbert and George soft-boiled an egg and that was a sculpture,” Anthony Caro, the British sculptor who killed the plinth, told the BBC in a documentary about the two. “I laughed but I found I couldn’t take it seriously, because I couldn’t find any ground that was shared between them and me.”

“We respect all art history, it’s all part of our family background,” George told the Guggenheim audience member who asked about their influences. “But we’re not gallery goers. We’re not the artists who quote their influences that way. We feel we’re more influenced by opening the door in the morning, finding some vomit on the street, and seeing a pigeon breakfasting from it, and wondering whether it’s an Indian takeaway or a Chinese takeaway and whether the person who left it there was Scottish or Irish or English.”

You can’t help but think about how high the bar must be for someone trying to shock in the age where the art world has, as they put it, shifted to place Gilbert and George in a more central position. They have a stock answer for meeting art students, which is: “Never before have we seen so many good-looking artists!”

It’s odd whenever the avant-garde becomes established, and Gilbert and George are by no means newly arrived—they’ve shown at White Cube for the past 10 years, and had a Tate Modern retrospective in 2007—but the degree to which they’ve set up shop at the edge makes events like the one at the Guggenheim extra strange. They eat at the same Turkish restaurant in Hackney every single night, to erase the question of food so that their minds may focus on art (this restaurant fidelity is admittedly a little less strange now that they are older—George always used to be the one with glasses, now Gilbert uses them to read as well). When they came to New York in the 1980s, their place used to be Joe Jr.’s, and the Gramercy Park Hotel, though that restaurant has now closed and the hotel has become much more a place where you’d hang a Gilbert and George than a place that would host one.

They actually broke the $1 million barrier at auction only in 2008, which is not necessarily a meaningful statistic for any artist, though it does put them in a certain class. They paid the considerable production costs for the London Pictures themselves because they wanted to be able to own them before they sold them. “Never a lender nor a borrower be,” George told The Observer at Lehmann Maupin.

We asked them for their impressions on how the living sculpture has aged, and about its conservation, how the changing appearance has affected their oeuvre. They used to be firebrands in suits, but these days they look like authority figures.

“It’s evolutionary, as our brains and our souls develop,” said George. “We anticipated these pictures 10 years ago.”

“Everybody’s ending up as Father Christmas,” Gilbert said with a shrug.

They want their art to encapsulate the past, present and future, they said, and to change things. They were thrilled to have recently shown the works in Hong Kong, where seven reporters interviewed them, all female. They took pleasure in showing in Gda?sk, where they’re not used to seeing pictures of “two men together, let alone two men who are an artist.” Culture, they enjoy repeating, makes us who we are.