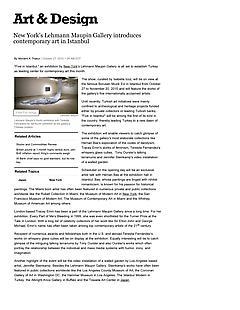 Five in Istanbul," an exhibition by New York's Lehmann Maupin Gallery is all set to establish Turkey as leading center for contemporary art this month.

The show, curated by Isabella Icoz, will be on view at the famous Borusan Müzik Evi in Istanbul from October 27 to November 20, 2010 and will feature the works of the gallery's five internationally acclaimed artists.

Until recently, Turkish art initiatives were mainly confined to archeological and heritage projects funded either by private collectors or leading Turkish banks. "Five in Istanbul" will be among the first of its kind in the country, thereby leading Turkey to a new dawn of contemporary art.

The exhibition will enable viewers to catch glimpse of some of the gallery's most elaborate collections like Hernan Bas's exploration of the codes of dandyism, Tracey Emin's works of feminism, Teresita Fernandez's whispery glass cubes, Tony Oursler's talking terrariums and Jennifer Steinkamp's video installation of a walled garden.

Scheduled on the opening day will be an exclusive artist talk with Hernan Bas at the exhibition hall in Istanbul. Bas, whose paintings are tinged with nihilist romanticism, is known for his passion for historical paintings. The Miami born artist has often been featured in numerous private and public collections worldwide like the Rubell Collection in Miami, the Museum of Modern Art in New York, the San Francisco Museum of Modern Art, The Museum of Contemporary Art in Miami and the Whitney Museum of American Art among others.

London-based Tracey Emin has been a part of the Lehmann Maupin Gallery since a long time. For her exhibition, Every Part of Me's Bleeding in 1999, she was even shortlisted for the Turner Prize at the Tate in London. With a long list of celebrity collectors of her work like Sir Elton John and George Michael, Emin's name has often been taken among top contemporary artists of the 21st century.

Recipient of numerous awards and fellowships both in the U.S. and abroad Teresita Fernández's works on whispery glass cubes will be on display at the exhibition. Equally interesting will be to catch glimpse of the intriguing talking terrariums by Tony Oursler and also Oursler's works which often portray the relationship between the individual and mass media systems with humor, irony, and imagination.

Another highlight of the event will be the video installation of a walled garden by Los-Angeles based artist, Jennifer Steinkamp. Besides the Lehmann Maupin Gallery, Steinkamp's works have often been featured in public collections worldwide like the Los Angeles County Museum of Art, the Corcoran Gallery of Art in Washington DC, the Hammer Museum in Los Angeles, The Istanbul Modern in Turkey, the Albright-Knox Gallery in Buffalo and the Towada Art Center in Japan.