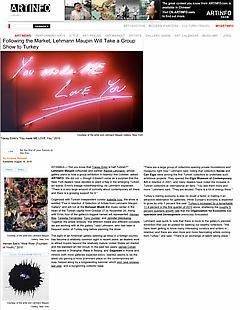 ISTANBUL—"Did you know that Tracey Emin is half Turkish?" Lehmann Maupin co-founder and partner Rachel Lehmann, whose gallery plans to host a group exhibition in Istanbul this October, asked ARTINFO. We did not — though it doesn't come as a surprise that the New York dealers have decided to plant a flag in the emerging Turkish art scene, Emin's lineage notwithstanding. As Lehmann explained, "There is a very large amount of curiosity about contemporary art there, and there is a growing support for it."

Organized with Turkish independent curator Isabella Icos, the show is entitled "Five in Istanbul: A Selection of Artists from Lehmann Maupin Gallery" and will run at the Borusan Müzik Evi music center in the heart of the Turkish capital from October 27 to November 20. Along with Emin, four of the gallery's biggest names will represented: Hernan Bas, Teresita Fernández, Tony Oursler, and Jennifer Steinkamp. Together the artists embody "the different media and different concepts we are working with at the gallery," said Lehmann, who had been a frequent visitor of Turkey long before planning the show.

The sight of an American gallery opening up shop in a foreign country has become a relatively common sight in recent years, as dealers work to attract buyers beyond the relatively mature United States art market and the standard art-fair circuit. In the past two years, James Cohan has opened in Shanghai, Pace in Beijing, and Gagosian in Rome and Athens (with more galleries expected soon). Istanbul seems to be the latest city gaining a more prominent place on the contemporary-art map, helped along by a longstanding biennial, which won rave reviews last year, and a burgeoning collector base.

"There are a large group of collectors opening private foundations and museums right now," Lehmann said, noting that collectors Sevda and Can Elgiz were among the first Turkish collectors to undertake such ambitious projects. They opened the Elgiz Museum of Contemporary Art in Istanbul in 2001, and many dealers have noted the increase in Turkish collectors at international art fairs. "You see them more and more," Lehmann said. "They are excited. There is a lot of energy there."

Turkey’s roaring economy is also no doubt a factor in making it an attractive destination for gallerists. While Europe’s economy is expected to grow by only 1 percent this year, Turkey’s increased by a remarkable 11.4 percent in the first quarter of 2010 alone, shattering the roughly 5 percent quarterly growth rate that the Organization for Economic Co-operation and Development previously forecasted.

Lehmann was quick to note that there is more to the gallery's planned exhibition than just an pretext for seeking out wealthy collectors. "We have been getting to know many interesting curators and writers in Istanbul, and there are also more and more fascinating artists coming from Turkey," she said. "There is an exchange of talent taking place."