This presentation offers a cross-section of her practice, featuring six works―a video, a quipu installation, and four paintings―that represent Vicuña’s poetic exploration of menstruation as a metaphorical thread that unites the past to the present, and connects women to the earth and cosmos.

Born in Santiago, Chile in 1948, Vicuña moved to London to attend the Slade School of Fine Art in 1972. Shortly after her arrival, a CIA-backed military coup in Chile led to the assassination of the socialist president Salvador Allende and the establishment of General Augusto Pinochet’s 17 year dictatorship. Vicuña entered self-imposed exile, which led to five decades of work aimed at dismantling patriarchy, white supremacy, violent totalitarian rule, ecological genocide, and the destruction of indigenous culture. Vicuña’s work has recently gained increasing global visibility and is currently featured in exhibitions in Seoul, Gwangju, Shanghai, and Madrid.

“[Vicuña is] an artist who resists formal logics that might classify her endeavors within a specific artistic practice...Poetry, painting, music, performance and installation—among other media, techniques, and languages—might only be formal indices of what she does, not their result, which always remains entrapped in that something.”

— José de Nordenflycht Concha in Story of the Red Thread (2017)

“Almagria, (Bitter soul) is knitting and suddenly her needles drop to the ground, and the red thread goes up! She realizes her menstruation connects her to the cosmos. A male peacock tries to get rid of the thread, but a wise old Taoist woman holds the thread showing her the way.” — Cecilia Vicuña

Preparatory drawing for the original painting

Preparatory drawing for the original painting

Original painting, lost in the 1970s in Los Angeles

Original painting, lost in the 1970s in Los Angeles

The painting celebrates the return of menstruation, a taboo subject, “a portrait of the blood coming out of the vagina as beautiful clots.” She had painted clots of blood before but no one realized what they were. The clots, she said, reminded her of de Kooning’s shapes and colours, “although here they don’t look like this.” She (it is a self-portrait) is floating or flying “on the air above the olive green killed by the titanium white,” “with a snake of sand” that stretches like an extra limb across the canvas. She plays with a string that circles her body: “I am part of a cosmic weaving, nothing is separate from everything else.” Springing up at either edge of the canvas are spiky branches, like an unwoven crown of thorns. Two tightly woven blood-red plaits frame her face and her eyes are red “because I use my blood for looking.” – Cecilia Vicuña

In many cultures, menstruation has historically been associated with female weakness, shame, and disgust and has justified patriarchal power and the perpetuation of misogyny and violence towards women. In each of the works presented―Quipu Menstrual (installation) (2006), Quipu Menstrual (video) (2006), Angel de la Menstruación (1973), Hilito y Finadita (1969/2020), Almagria (1971/2020), and Amaranta (1972/2021)―Vicuña offers an alternative depiction of menstruation as a celestial, powerful, lifegiving aspect of femininity.

Created in Chile during the 1970s, all but one of Vicuña’s menstrual paintings were lost or destroyed shortly after their making. The single surviving work is Angel de la Menstruación (1973). The three “lost paintings” Hilito y Finadita (1969/2020), Almagria (1971/2020), and Amaranta (1972/2021) are part of a recent series in which Vicuña creates “doubles” of paintings from the 1960s and 1970s that no longer exist. According to Vicuña, these four paintings (one made each year in narrative sequence) represent “the first appearance of the red menstrual thread in my work, a stream of blood that continues to evolve and emerge in my paintings, precarios, films, quipus and performances.”

After the original 1969 work

“A couple goes for a walk and finds a murdered woman lying on the ground. A thin red thread of menstrual blood runs down her legs, as everlasting life. Taken with her beauty, the man abandons his partner to attend to the murdered woman.” — Cecilia Vicuña

“A girl is wrapped in her menstruation as if it were a gown of blood. Because her menstruation is perceived as a disgusting threat, a man knifes her laughing gaudily as he murders her, while another man laughs even harder, holding her wrap of blood that now is a prison tethering her to bone poles. A telephone line controls her and two hands, male and female push her in place, to facilitate the murder.” — Cecilia Vicuña

CECILIA’S FIRST QUIPU AND ITS EVOLUTION

During the 1960s, Vicuña created el quipu que no recuerda nada (the quipu that remembers nothing) in her bedroom. Her first quipu was both a conceptual and performative project, an act of poetic resistance rooted in Vicuña’s desire to recover the history of the ancient quipus—an Andean method of visual, tactile communication and record-keeping system involving the knotting of colored strings.

The traditional quipus were records of Incan history, but the method for reading them has been lost and their precise meaning in many cases remains elusive. Vicuña’s work represents the cultural destruction of indigenous South America and pays tribute to the many erased histories and lost knowledge of the region.

Later, in the 1980s and 1990s, Vicuña began creating larger quipu installations out of unspun wool and elements of assemblage, poetry, and performance.

Quipu Menstrual is a large-scale installation composed of long, thick strands of deep-red unspun wool that descend from the ceiling and pool on the floor. For Vicuña, the work represents both a memory and an offering to the Cerro El Plomo glacier, the tallest mountain visible from Santiago, which is the primary source of water for all surrounding communities.

The Quipu Menstrual installation, composed of both the wool installation and Quipu Menstrual video of Vicuña performing a ritual act on the mountain, acts as a remnant of or surrogate for the blood of the colonized, the Earth, and the thread held in the hand of the sacrificial child. The color red here functions as both signifier and signified, as the blood that circulates through the body and as life, death, love, and violence. The deep red is pure, accumulated energy that soaks through and adheres from one body to another, from one site to another.

“Quipu, or khipu, knot (Quechua), ancient Andean ‘script’ or ‘writing’ with knotted cords, used for oral poetry, storytelling, accounting, and maintenance of communal rights and responsibilities. In the Andes, people did not write, they wove meaning into textiles and knotted cords. Five thousand years ago they created the quipu (knot), a poem in space, a way to remember involving the body and the cosmos at once; a tactile, spatial metaphor for the union of all.”

In 2006 Quipu Menstrual was presented as part of the group exhibition Del Otro Lado: Arte de Mujeres en Chile at the Centro Cultural Palacio de La Moneda in Santiago. There, the work was met with opposition and censorship. Vicuña describes the experience:

“Offended by the thick streams of wool, some artists in the show ask the curator to remove my work or diminish it in size 'because it is too big' (although it fits exactly the space assigned). Echoing their request, the curator asks me to undo the piece and create a thinned out version. Outraged by this request, I wished to remove my work from the show, but then I saw: the violence against the threads is the violence against the glaciers. I decided to stay, and create a ‘versión débil,’ a ‘weak version,’...a wounded quipu that tells the story of the censorship it endured.”

Film still from documentation of the performance at Cerro el Plomo, Santiago

Film still from documentation of the performance at Cerro el Plomo, Santiago

A CHILDHOOD MEMORY OF THE RED THREAD

In 1956, Vicuña, along with thousands of other Chilean schoolchildren, visited the National Museum of Natural History in Santiago. The purpose of the visit was to witness a newly-discovered child’s mummy, known as the Cerro El Plomo child. Five hundred years ago, the summit of the Cerro El Plomo mountain was the site of an Incan sacrificial ritual where the child was buried alive as a “principal sacrifice” and “messenger to the gods.” Vicuña learned years later that researchers found a red thread in the child mummy’s fist, contained within a bag made from a llama scrotum. 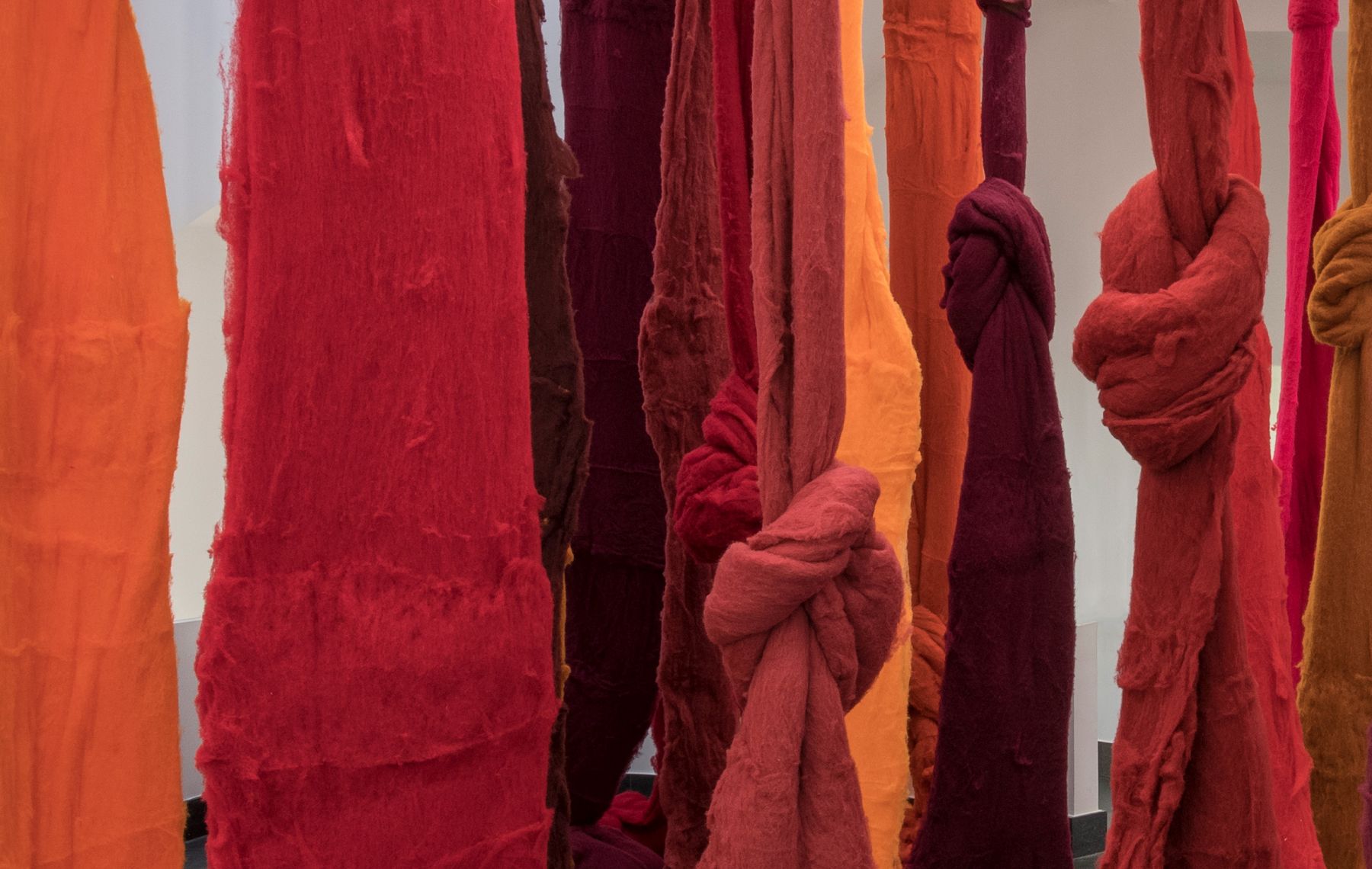 THE RED THREAD THROUGH FILM

Video has played an important role in Vicuña’s practice as documentation of performances, components of installations, and works in their own right. Much of Vicuña’s moving image work engages with the ocean, which she views as a living force kindred to the female spirit. Her videos refer to the fragility of ecosystems and mourn the extinction of species as a result of human abuse.

• Bodies of Water: The 13th Shanghai Biennale through July 25