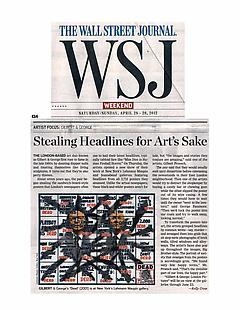 The London-based art duo known as Gilbert & George first rose to fame in the late 1960s by donning dapper suits and treating themselves like living sculptures. It turns out that they're also petty thieves.

About seven years ago, the pair began stealing the sandwich-board-style posters that London's newspapers often use to hail their latest headlines, typically tabloid fare like "Man Dies in Human Fireball Horror." On Thursday, the artists opened a new show of their work at New York's Lehmann Maupin and Sonnabend galleries featuring headlines from all 3,712 posters they amassed. Unlike the actual newspapers, these black-and-white posters aren't for sale, but "the images and stories they conjure are amazing," said one of the artists, Gilbert Proesch.

The pair said that they would usually wait until dinnertime before canvassing the newsstands in their East London neighborhood. Then one of the artists would try to distract the shopkeeper by buying a candy bar or chewing gum while the other slipped the poster out of its wire casing. A few times they would have to wait until the owner "went to the lavatory," said George Passmore. "Then we'd tuck the poster into our coats and try to walk away, looking normal."

To transform the posters into art, the artists grouped headlines by common terms—say, murder—and arranged them into grids that sit atop eerie photographs of brick walls, tilted windows and alleyways. The artist's faces also pop up throughout the images, Big Brother-style. The portrait of society that emerges from the posters is accordingly grim. "We found very few happy terms," Mr. Proesch said. "That's the invisible part of our lives, the happy part."

"Gilbert & George: London Pictures" will be on view at the galleries through June 23.

An Extended Q&A with Gilbert & George

On Thursday, the London art duo Gilbert & George opened a new show of their work at New York's Lehmann Maupin and Sonnabend galleries featuring headlines from 3,712 newspaper posters they collected in London over a six-year period.

Recently, the artists agreed to discuss the project that became "Gilbert & George: London Pictures," up at the galleries through June 23. Here's an edited excerpt.

George: Ten years ago we took our first images of some newspaper posters for a group of pictures called the Bomb pictures, which were based on bomb attacks in Mumbai and London and around the world. Those were shown at the Tate Modern. We didn't think of them as "poster" pictures, but after a while, we realized there were so many subjects we could address—hangings, hate—in a way that could feel very different from simply using a pencil or a brush. With the posters, we could also do that.

Gilbert: All these extraordinary modern subject matters, we don't have to make them up. They were all there, and they began to create in our minds an amazing, modern, Western townscape."

George: In some pockets of the world, there's no free press, and in those areas you won't see sex stories wind up as newspaper headlines. Maybe these posters are actually a celebration of the freedoms of the press in the West.

Gilbert: We worked on it for six years. Every day we had to steal roughly three posters, and finally we had 3,712.

George: We'd steal them on the way to dinner. We always walk through East and North London to go to dinner, and it's very difficult because we didn't want to get caught.

Gilbert: The shopkeepers will stop you if they can.

George: Gil can be pretty devious. He would usually go into the shop to buy some chewing gum or a Mars bar, and then I'd use that time to steal the poster. We became very professional. We were both very good. If it was a difficult shop, we'd wait and wait until the shopkeeper went to the lavatory. Then we'd tuck them into our coats and try to walk away, looking normal. When it was raining, we'd steal the posters wet.

Gilbert: Then after six years, we said, "That's it. We have enough." So we began to divide up the pile into categories based on the words in the headlines, like "murder," "sex" or "money."

George: Those were the three words that popped up most often, and you don't have to go to university to understand why. But we were still really fascinated by our collective fascination with dying and killing. It's extraordinary. We also saw very early on the two levels these posters work on: Obviously they're used to sell newspapers, but they also dwell so heavily on shame and human disaster.

Gilbert:The images and stories these words conjure are amazing: "Man Found Hanging in Graveyard," "Pal Dies in Copycat Hanging." What a story is caught up in that combination of words.

Gilbert:The relentless mantra of messiness. We wound up making 292 pictures using all the posters.

George: We like that we're celebrating something – the newspaper poster – that might not exist at the end of our lifetimes. People are finding different ways of selling papers now. Online. But when we first moved to London, we had trouble losing our country backgrounds. Reading the local papers was one of the first ways we became citified. The London Evening Standard for many years employed a man who drew the poster headlines on tin every day, and then a new owner came in and they started printing them with a standard typeface. But when we started stealing these posters, we could tell whenever he went on holiday, because those days were the only ones that used a standard typeface instead of his own hand-drawn versions. Just once a year he went away.

Gilbert:Besides the shopkeepers, we might have been the only people to notice that man's holiday. Most people don't notice much. In that way, life always seems invisible—unless you slap people and make them look. That's why art stops time. It makes them stop and look. That's why we want powerful imagery in our art—we want them to remember it.

George: It's a freezing moment.

Gilbert: That's what the posters want to do too, which is why arresting words like "sex" and "death" pop up so often. We found very few happy terms. That's the invisible part of our lives, the happy part. Maybe that part can also feel fake, no?

George: Just look at the countries that only produce happy art—most of those places are totalitarian, like North Korea. The art there feels artificially happy.