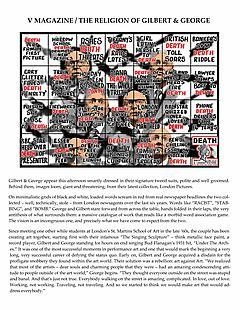 The Religion of Gilbert & George
By Jenny Bahn

Gilbert & George appear this afternoon smartly dressed in their signature tweed suits, polite and well groomed. Behind them, images loom, giant and threatening, from their latest collection, London Pictures.

On minimalistic grids of black and white, loaded words scream in red from real newspaper headlines the two collected – well, technically, stole – from London newsagents over the last six years. Words like “RACIST”, “STABBING”, and “BOMB.” George and Gilbert stare forward from across the table, hands folded in their laps, the very antithesis of what surrounds them: a massive catalogue of work that reads like a morbid word association game. The vision is an incongruous one, and precisely what we have come to expect from the two.

Since meeting one other while students at London’s St. Martins School of Art in the late ’60s, the couple has been creating art together, starting first with their infamous “The Singing Sculpture” – think metallic face paint, a record player, Gilbert and George standing for hours on end singing Bud Flanagan’s 1931 hit, “Under The Arches.” It was one of the most successful moments in performance art and one that would mark the beginning a very long, very successful career of defying the status quo. Early on, Gilbert and George acquired a disdain for the profligate snobbery they found within the art world. Their solution was a rebellion: art against Art. “We realized that most of the artists – dear souls and charming people that they were – had an amazing condescending attitude to people outside of the art world,” George begins. “They thought everyone outside on the street was stupid and banal. And that’s just not true. Everybody walking on the street is amazing, complicated. In love, out of love. Working, not working. Traveling, not traveling. And so we started to think we would make art that would address everybody.”

Their work is one of a democratic inspiration. They are fascinated with the universal elements of the human condition: death, hope, life, fear, sex, money, race, religion. They are humanistic visionaries, making art for the people, inspired by the people. They, as the artists, see themselves as secondary. “We try to let the pictures make themselves with minimal interference from us,” George says. “Let them print themselves from how we are inside.”

“We don’t want to be very clever,” Gilbert professes humbly.

To maintain a purity of vision, they abstain from music, the cinema, and the art of their contemporaries. Gilbert, unapologetic in their refusal to engage with the cultural world, explains: “We are completely alone, no? Standing in front of this empty world. And that’s very good for making art.” This time around, the art’s preoccupations are with death and brutality, a culture of fear in which we are immersed in on a day-to-day basis but rarely pay attention to. For six years, Gilbert and George worked in a studio packed to the gills with what eventually totaled 3,712 posters sporting grisly headlines. “You began to see that they’re not just posters to sell newspapers; they’re actually huge human shames, sorrows, disasters,” George explains. Therein lies the vast complexity just beneath the simplicity of their work. These are not just words, images, posters. These are love letters to the ghosts of London, tributes to the tragedies endured by others and then forgotten quickly by the masses. “It’s a celebration of the lives and deaths of all those single people. They are immortalized now,” George says. Elaborating on that point, Gilbert continues: “We see these titles every day, and then the next day, another. You just forget everything. But we are freezing them. They are finished after one day, the posters. Life goes on. But here we can see what we actually do to each other.”

With a gentle hand and a stark palate, Gilbert and George shake the viewer awake, urging us to see what is going on around us. The world is a horrible and complex mess, full of inconsistencies and complications. This is life. And, as Gilbert and George see it, it is a work of art.