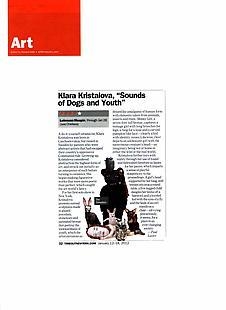 Review: Klara Kristalova, “Sounds of Dogs and Youth”
Adolescent awkwardness is given an animistic twist.
By Paul Laster

A do-it-yourself ceramicist, Klara Kristalova was born in Czechoslovakia, but raised in Sweden by parents who were abstract artists that had escaped their country’s oppressive Communist rule. Growing up, Kristalova considered abstraction the highest form of art, and struck out initially as an interpreter of such before turning to ceramics. She began making figurative works that were more poetic than perfect, which caught the art world’s fancy.

For her first solo show in New York, Kristalova presents surreal sculptures made in glazed porcelain, stoneware and patinated bronze that portray the awkwardness of youth, which the artist envisions as dreamlike amalgams of human form with elements taken from animals, insects and trees. Skinny Girl, a seven-foot-tall bronze, captures a teenage girl with long branches for legs, a twig for a nose and a carved-pumpkin-like face—clearly a kid with identity issues. Likewise, Deer depicts an adolescent girl with the eponymous creature’s head—an imaginary being not at home in either the wild or the real world.

Kristalova further toys with reality through her use of found and fabricated furniture as bases for her pieces, which imparts a sense of playful domesticity to the proceedings. A girl’s head supported by her long, stiff tresses sits atop a round table, a five-legged child dangles her limbs off a barstool, and a hooded kid with the eyes of a fly and the beak of an owl stands on a chair—all vying precariously, it seems, for a place in an ever-changing society.