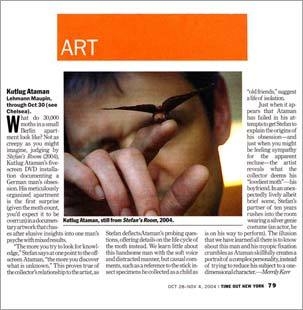 What do 30,000 moths in a small Berlin apartment look like? Not as creepy as you might imagine, judging by Stefan's Room (2004), Kutlug Ataman's five-screen DVD installation documenting a German man's obsession. His meticulously organized apartment is the first surprise (given the moth count, you'd expect it to be overrun) in a documentary artwork that chases after elusive insights into one man's psyche with mixed results.

"The more you try to look for knowledge," Stefan says at one point to the off-screen Ataman, "the more you discover what is unknown." This proves true of the collector's relationship to the artist, as Stefan deflects Ataman's probing questions, offering details on the life cycle of the moth instead. We learn little about this handsome man with the soft voice and distracted manner, but casual comments, such as a reference to the stick insect specimens he collected as a child as "old friends," suggest a life of isolation.

Just when it appears that Ataman has failed in his attempts to get Stefan to explain the origins of his obsession - and just when you might be feeling sympathy for the apparent recluse - the artist reveals what the collector deems his "loveliest moth" - his boyfriend. In an unexpectedly lively albeit brief scene, Stefan's partner of ten years rushes into the room wearing a silver genie costume (an actor, he is on his way to perform). The illusion that we have learned all there is to know about this man and his myopic fixation crumbles as Ataman skillfully creates a portrait of a complex personality, instead of trying to reduce his subject to a one-dimensional character.