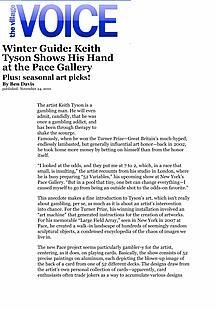 The artist Keith Tyson is a gambling man. He will even admit, candidly, that he was once a gambling addict, and has been through therapy to shake the scourge. Famously, when he won the Turner Prize—Great Britain’s much-hyped, endlessly lambasted, but generally influential art honor—back in 2002, he took home more money by betting on himself than from the honor itself.

“I looked at the odds, and they put me at 7 to 2, which, in a race that small, is insulting,” the artist recounts from his studio in London, where he is busy preparing “52 Variables,” his upcoming show at New York’s Pace Gallery. “But in a pool that tiny, one bet can change everything—I caused myself to go from being an outside shot to the odds-on favorite.”

This anecdote makes a fine introduction to Tyson’s art, which isn’t really about gambling, per se, as much as it is about an artist’s intervention into chance. For the Turner Prize, his winning installation involved an “art machine” that generated instructions for the creation of artworks. For his memorable “Large Field Array,” seen in New York in 2007 at Pace, he created a walk-in landscape of hundreds of seemingly random sculptural objects, a condensed encyclopedia of the chaos of images we live in.

The new Pace project seems particularly gambler-y for the artist, centering, as it does, on playing cards. Basically, the show consists of 52 precise paintings on aluminum, each depicting the blown-up image of the back of a card from one of 52 different decks. The designs draw from the artist’s own personal collection of cards—apparently, card enthusiasts often trade jokers as a way to accumulate various designs they have an affection for, and Tyson estimates he owns “up to 1,000.” He has selected the cards to hit a diverse set of notes, ranging from the deliberately generic to the intricacies of a card featuring a Hieronymus Bosch painting.

The show cuts a broad path through the history of card design, from ’50s pin-ups to modern corporate packs, so that it forms an oblique slideshow essay on the collective subconscious. “It’s amazing what works its way in there,” Tyson says. “There’s all this repressed stuff, Jungian archetypes, some racism, suggestions of stuff going on in the world—all of this overlooked history in this space that’s meant to be a placeholder, really.” The societal trajectory of “52 Variables” begins with an elephant standing for British colonialism in India, and ends with the little bird from Twitter—draw from that what you will.

Tyson is one of those artists who can speak about his work with a sort of analytical grandiloquence, as if he’s solving a theorem: “I am always trying to find some way in a solid and static artwork to show something dynamic.” He’s concerned with the cosmic, and has even been “Artist in Residence” at Oxford’s Astrophysics and Cosmology Department.

What’s most promising about “52 Variables,” however, is more down to earth. Like most good art gestures, the idea itself is actually very simple—it just opens naturally onto a multitude of associations. In its quotation of vernacular culture, “52 Variables” is Pop. In its precise cataloging of data, and eye for subtle historical criticism of its imagery, it’s Conceptual. But, finally, Tyson stresses it’s also a show about painting, about abstraction and pattern and some striking images. “Usually I’m not such a fan of my shows, because I am so covered in neuroses,” Tyson confesses, summing up his feelings about the new project. “But these look quite nice.”
Sounds like he’s betting on himself again.

‘Law of the Jungle’?December 9 to January 28, 2011?Looking to do an exhibition capitalizing on the buzz around Brazil, Lehmann Maupin turned to Brazilian artist Tiago Carneiro da Cunha as curator—and has gotten something much more wild and personal in return, in the great tradition of artist-curated shows. “Law of the Jungle” serves as a showcase for some interesting Brazilian artists, from Jac Leirner, who makes art out of devalued Brazilian currency, to the psychedelic street art duo Os Gemeos. But it also incorporates a more far-reaching selection of da Cunha’s idols and mentors, from the Bali-based painter Ashley Bickerton to the inscrutable British conceptualist Liam Gillick, his former adviser. Lehmann Maupin Gallery, 540 West 26th Street, lehmannmaupin.com