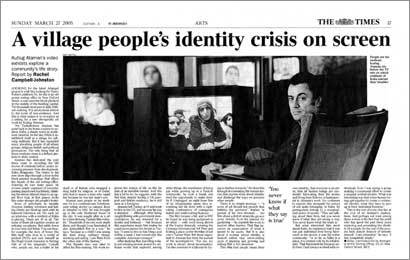 LOOKING for the latest Artangel project is a bit like looking for Harry Potter's platform 9 3/4. Its site is an old postal sorting office in New Oxford Street: a vast concrete block plonked in the middle of the bustling capital. Yet thousands must pass it daily without noticing. It is anonymous almost to the point of non-existence. And this is what makes it so evocative as a setting for a new site-specific art work by Kutlug Ataman.

The Turkish-born Ataman has gone back to his home country to explore Kuba, a shanty town in northwest Istanbul. In the late 1960s it established itself as a refuge for left-wing militants. But it has expanded since, absorbing people of all ethnic groups, religious beliefs and political persuasions. The only thing that all these residents share is a defiant attitude to state control.

Ataman has dedicated the past three years to recording the life stories of residents before, under increasing pressure from development, Kuba disappears. The visitor to his new show slips through a door in the black-painted hoardings that efface the façade of the old sorting-office. Entering its vast dusty space, he crosses empty expanses of concrete, passing abandoned machinery, climbing the debris-littered stairs to an upper floor that, at first glance, looks like some strange old people's home.

Rows of armchairs, in mouldy Draylon, balding velveteen and fading chintz, are lined up, each with its battered television set. On each set an interview with a resident of Kuba is playing. There are 40 in all. The noise of them all together creates an echoing cacophony. But settle down in your seat and listen. You can hear, for example, the story of Soner, the film buff, who lives in a world of pirated DVDs and sees himself as the Hugh Grant character in Notting Hill; or of the enigmatic Toskafa who, people say, has a bullet in his skull; or of Bulent, who swapped a drug habit for religion; or of Guler, who had to marry a man who raped her because he was her aunt's son.

Ataman uses people as his medium. He is a contemporary Scheherazade telling stories on camera. Born in Istanbul in 1961, he was brought up in the only Modernist house in the city. It was sought after as a set by a then thriving Turkish film industry. "Hundreds of movies were made there, and though I was fascinated, it also demystified film in a way," he says, "because as a child I was seeing the stars doing ordinary things, smoking and eating. I saw films from the other side of the fantasy."

This flipside view was later to affect his filmmaking. His work explores the notion of life on the far side of an invisible barrier. And this has a lot to do, he suggests, with the fact that, despite having a US passport and British residency, he is still seen as a foreigner.

Ataman left Turkey at 19 and went to live in the US, not because he was a dissident -- although, after being caught filming anti-government demonstrations, he was detained for a month and tortured -- but because this experience made him realise he could never pursue his dream in Turkey. "I went to live in San Diego and within a week I had turned into the complete American teenager."

After studying film, travelling widely and winning several awards for art-house works that explored, among other things, the experience of being gay while growing up in a Turkish community, he took a break and used the opportunity to make Semiha B. Unplugged, an eight-hour film of an octogenarian opera diva recounting her life story with a captivating combination of outrageous hubris and undercutting humour.

The film became a hit, and in 1997 he found he was being acclaimed as an artist -- with work being shown at the Venice Biennale, winning the Carnegie International Art Prize and finding a place on the shortlist of last year's Turner Prize. But more important to Ataman has been the pursuit of his investigations: "For me, my work is always about investigation. I'm like someone in a laboratory trying to further research." He does this through documenting the human stories that express ideas about identity and challenge the ways we perceive other people.

There is no simple message -- "a work of art should not preach; that belittles the spectator". Rather, in pursuit of his own interests his film about a British amaryllis-grower arose directly from his passion for gardening -- he expands the work to explore other themes. That film becomes an examination of what it means to be exotic. But it is also about a woman whose identity is formed within that never-ending cycle of planting and growing and wilting that is her obsession.

This idea that people create their own identity, that everyone is an artist, that all human beings are constantly fabricating their life stories and living their fictions, is fundamental to Ataman's work. He continues to explore this, alongside the notion of not quite belonging, in Kuba. Its protagonists belong to a marginalised sector of society. "They are talking about their lives, but you never know if what they are saying is real. You never know what the truth is."

But what interested him most about Kuba, he explains, is that it was not just individual lives being fabricated in the stories, it was the entire community. "In so far as Kuba is a place, it is created only by its inhabitants. That fascinated me because until then I had always worked with individuals. Now I was seeing a group making a communal effort to create a singular unified identity. What was interesting was that when human beings get together to create a communal identity, what they have to give up is their individual freedom."

This is the sort of irony that lies at the root of all Ataman's explorations. And perhaps not least among these ironies is the fact that the artist who has spent the past three years exploring and presenting the identity of a people, by the end of the process feels almost drained of identity himself. "I am exhausted," he says. "I feel completely empty."

Kuba, commissioned by Artangel, is at the Sorting Office, 21-31 New Oxford Street, WC1