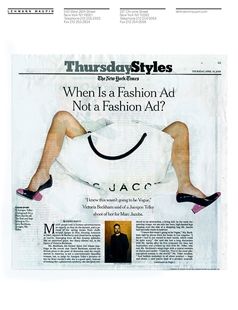 MANY people look to fashion advertisements as eagerly as they do the layouts, and a perusal of the spring issues finds chalk-striped vamps at Dior, discoing Amazons at D&G, hipsters at Burberry and cloud-borne nymphs at Lanvin. Emerging from all this dreamy splendor, like an uninvited guest, her sharp elbows out, is the figure of Victoria Beckham.

Ms. Beckham, the former Spice Girl whose marriage to the soccer star David Beckham stirred the British press to the point of obsession until the couple moved to America, is not a conventionally beautiful woman, but, to judge by Juergen Teller's pictures of her for Marc Jacobs's ads, she is a good sport. Instead of looking like a glamorous celebrity, she has been rendered as an abstraction, a living doll. In the most disquieting image, we see only her bare, high-heeled legs flopping over the side of a shopping bag Mr. Jacobs had specially made to hold her.

"I knew this wasn't going to be Vogue," Ms. Beckham said by phone from her home in Los Angeles. "I knew I had to put myself in their hands, which could be quite scary." She said she had a long discussion with Mr. Jacobs after he first proposed the idea, last September, and a follow-up chat with Mr. Teller, who met Ms. Beckham's misgivings with a typical mixture of charm and candor. "I told her, 'You're the most photographed woman in the world,' " Mr. Teller recalled. " 'And fashion nowadays is all about product — bags and shoes — and you're kind of a product yourself, aren't you?' She was, like, 'Uh, yeah.' "

As Ms. Beckham calculated the advantages, "People are always going to talk about what Marc does."

If fashion shows are a way for a designer to think out loud, collaborations with a photographer can help spin those disparate ideas into a story. Both Ralph Lauren and Calvin Klein owe a debt to the visionary eye of Bruce Weber, who is really a storyteller. Gianni Versace frequently paid homage to Richard Avedon, whose pictures lent imaginative energy to Versace's designs. And it seems doubtful that generations of women would have felt quite the same about Yves Saint Laurent's pantsuits if Helmut Newton had not made them an object of sex and mystery.

Today, the most meaningful collaboration is between Mr. Jacobs and Mr. Teller. In one way or another their ads, begun in 1997, with a photo of Kim Gordon performing in a lavender-pink tulle dress, serve an authentic record of the distractions and tastes of the moment, though Mr. Jacobs insists that they are really about "someone I know or someone I'm interested in seeing in my clothes."

An astonishing array of people has appeared in the ads, generally doing nothing in the Seinfeldian sense — lying in the grass, kicking up their heels, teasing a squirrel. The group has included Sofia Coppola, Dakota Fanning, the photographer William Eggleston and Winona Ryder, who pitched herself for an ad shortly after her shoplifting trial. Even Mr. Teller has put in an appearance, in makeup and wigs with Cindy Sherman and boldly naked with Charlotte Rampling.

"It was always free," said Mr. Teller, who is German and lives in London with his wife, Sadie Coles, an art dealer, and their young son, Ed. (He also has a daughter, Lola, with Venetia Scott, a stylist who has worked with Mr. Jacobs for many years.) Mr. Teller is extremely funny and gregarious, at once sensitive (he created a book-length series of photos around Ed, who is the spitting image of his dad) and capable of the gross joke. It's hard but not impossible to believe that he was once, as the London editor Jefferson Hack put it, "a shy, unknowing boy from Germany, incredibly intimidated by models."

Mr. Teller continued: "Marc and I just discuss. 'Oh, it would be great to have that person.' He introduced me to Sofia Coppola, and I thought, 'Oh, it would be really great to photograph her' and Marc said, 'Yeah, why don't we do a bag ad.' So we met at the Mercer, and I said, 'It's kind of snowing, let's just go to Central Park and do this bag ad.' I tried to make sense of what the hell she was going to do with a handbag, right? It had to come out of a real life story. You come out of a taxi or walk around the park. Not like some sort of model lying around on some sand with a handbag, oooh ..."

He laughed. "So there was this scenario in the park where suddenly these squirrels were coming, and Sofia put her hands out with the bag — I ended up cutting her out — and the squirrel looking toward her and the bag."

Although the ads are influential, with Mr. Teller's raw, overexposed style and bordered layout widely imitated, it's not immediately clear why. (Unlike most photographers who traverse the worlds of commerce and art, Mr. Teller works with just one assistant, and he uses a Contax G2 camera with an onboard flash.) Mr. Hack suggested that his advertising approach is "the opposite direction to everyone else," adding that as a young brand, Marc Jacobs should be irreverent and fun. "There's no heritage to play on, there's nothing to subvert," he said.

Certainly the ads are not overtly about selling anything. "They're not aspirational pictures," Mr. Jacobs said. Pointing to the Cindy Sherman ads, in which she and Mr. Teller look like dumpy siblings. "You wouldn't look at them and say, 'Oh, mmm, that dress is so attractive.' "

Yet Dennis Freedman, the creative director of W, which has published Mr. Teller's editorial work for years, contends that the ads are comparable to those Mr. Lauren did with Mr. Weber. "Ralph created a perfect world for his customer to live in," Mr. Freedman said. "Marc has created a world around himself, and everything he does has a kind of mystique. It's very aspirational to anyone who wants to feel they get it."

Taking almost the same line, the art dealer Barbara Gladstone, who is a friend of both the artist and the designer, said, "The ads are really for people who get it, and I think Marc and Juergen happily dispense with those who don't."

To that extent, buying something from Marc Jacobs is like joining a club. Of course, that can be a turnoff to some people, but that would matter only if Mr. Jacobs sought a justification for the ads, one beyond their ability to inspire and provoke. And since some of the ads barely show the clothes, clearly he is not.

You can't help wondering, looking at a decade's worth of ads, why more designers can't produce similarly engaging and original narratives. One explanation is they don't have Mr. Jacobs's degree of confidence. Nor do the photographers enjoy Mr. Teller's level of freedom. As Mr. Teller said, he and Mr. Jacobs have a chat at the start of a season, and Mr. Jacobs never directs him. "It's really that simple," Mr. Jacobs said. "I leave him alone, and he goes off and does his thing. Then we look at the pictures and we talk."

Breaking into a grin, he added: "Juergen is Juergen Teller's biggest fan — full stop. Usually after the shoot I get a phone call from him ..." — Mr. Jacobs dropped into a German accent — 'The pictures are really excellent, they're really excellent.' I think he uses the word excellent a lot."

Mr. Teller wouldn't bother to deny this. Yet, because of his humor, his intimate method of shooting, and a clear indifference to body shame, it would be easy to underestimate the value of what he does. As Mr. Hack said, "Juergen is very funny as a provocateur, but I think he's deadly serious as an artist." His is not so much a skewed view of things as it is a supremely neutral one.

Shamelessness is a feature of contemporary life; it visibly afflicts the celebrity and the wannabe celebrity, but it also informs and liberates the artist. For the Rampling shoot, which was done in a Paris hotel suite, Mr. Teller thought it made sense for him to be in the ads, since he and the actress were friends and she didn't want to endorse a product. And because he vaguely had in mind a fantasy, he also packed on 15 extra pounds. "I thought I should be this Louis XV big figure," he said.

The only trouble with that plan was he couldn't fit into the clothes Mr. Jacobs sent. "I thought, 'What the hell am I going to do now?' " he said. "There were these silver underpants, these sport pants." Mr. Teller laughed and continued: "The next day Charlotte arrived, and I was totally starting to sweat. She said, 'Now what are we going to do?' I said, 'I'm going to show you what I'm going to wear.' So I went into the bedroom, and I came out in these silver underpants. And she said, 'What the hell is that?' "

At this point, as Ms. Rampling howled, Mr. Teller said, he was having grave doubts about the rest of his plan. "I was smoking my cigarette, breaking out in a sweat. I said, 'Well, I was just thinking I could kiss you and fondle your breasts.'

"She sat down and got herself a cigarillo. She didn't say anything. The whole room was quiet for what seemed like months. I was, like, Oh my God, that is the most stupid thing I've ever said, how stupid was that? She just dragged on the cigarillo and crossed her legs, and she said: 'O.K., let's go. I'll tell you when to stop.' I thought, Oh my God, genius. I can't believe I'm getting away with it."

Mr. Teller paused. "So that was the ad."

In spite of an affinity for a certain kind of unpolished beauty, which Mr. Jacobs traces to grunge and the early work of Mr. Teller, as well as the pictures of Wolfgang Tillmans and Corinne Day, it's hard to say how these two men influence each other. Anyway, it seems a question of consciousness.

But, in a business of illusions and self-denials, it is interesting and even brave, that Mr. Teller and Mr. Jacobs, perhaps alone, are willing to put themselves out there — Mr. Teller with his bear belly, no less, and German kitsch world — and invite, as Mr. Freedman said, "the judgmental people to make judgments." That is what they have attempted to do with Ms. Beckham, whose participation forces a different question than the banality of "Is she beautiful?"