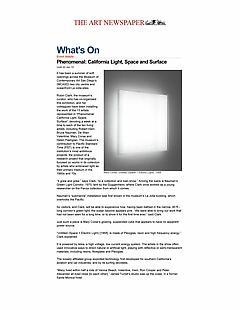 It has been a summer of soft openings across the Museum of Contemporary Art San Diego’s (MCASD) two city centre and oceanfront La Jolla sites.

Robin Clark, the museum’s curator, who has co-organised this exhibition, and her colleagues have been installing the work of the 13 artists represented in “Phenomenal: California Light, Space, Surface”, devoting a week at a time to each of the ten living artists, including Robert Irwin, Bruce Nauman, De Wain Valentine, Mary Corse and Helen Pashgian. The museum’s contribution to Pacific Standard Time (PST) is one of the institution’s most ambitious projects, the product of a research project that originally focused on works in its collection by artists who embraced light as their primary medium in the 1960s and 70s.

“It grew and grew,” says Clark, “to a collection and loan show.” Among the loans is Nauman’s Green Light Corridor, 1970, lent by the Guggenheim, where Clark once worked as a young researcher on the Panza collection from which it comes.

Nauman’s “submarine” installation was first shown in the museum’s La Jolla building, which overlooks the Pacific.

So visitors, and Clark, will be able to experience how, having been bathed in the narrow, 40 ft.-long corridor’s green light, the ocean beyond appears pink. “We were able to bring out work that had not been seen for a long time, or to show it for the first time ever,” said Clark.

Just such a piece is Mary Corse’s glowing, suspended cube that appears to have no apparent power source.

It is powered by tesla, a high voltage, low current energy system. The artists in the show often used innovative ways to direct natural or artificial light, playing with reflective or semi-transparent materials, including resins, fibreglass and Plexiglas.

The loosely affiliated group exploited technology first developed for southern California’s aviation and car industries, and by its surfing devotees.

“Many lived within half a mile of Venice Beach. Valentine, Irwin, Ron Cooper and Peter Alexander all lived close [to each other].” James Turrell’s studio was up the coast, in a former Santa Monica hotel.

“They were in the same ambient atmosphere of the ocean, sky and horizon melting.” The show includes drawings made by artists as they dev­eloped ideas on paper, many of which have never been exhibited before.

“We have John McCracken’s sketchbooks, which are notes to himself, and we have Alexander’s tests of how light would pass through cast resin bars, which are strokes of wax on paper.

MoMA has lent very poetic studies of light made by Turrell.” “Phenomenal” forms an overture to PST, the Getty-led research project on post-war West Coast art, and a ­series of exhibitions organised by about 60 institutions in greater Los Angeles and southern Californian.

Most open in October. Why the early start in San Diego? “We wanted to work closely with the artists and we couldn’t work with them all at the same time,” said Clark.

And, she added, the show is opening just before the launch of PST in LA because “we want LA to come here and to be free to go there. It’s not feasible to do both on the same day.”