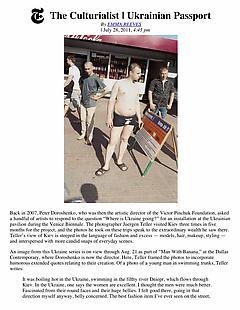 Back in 2007, Peter Doroshenko, who was then the artistic director of the Victor Pinchuk Foundation, asked a handful of artists to respond to the question “Where is Ukraine going?” for an installation at the Ukrainian pavilion during the Venice Biennale. The photographer Juergen Teller visited Kiev three times in five months for the project, and the photos he took on these trips speak to the extraordinary wealth he saw there. Teller’s view of Kiev is steeped in the language of fashion and excess — models, hair, makeup, styling — and interspersed with more candid snaps of everyday scenes.

An image from this Ukraine series is on view through Aug. 21 as part of “Man With Banana,” at the Dallas Contemporary, where Doroshenko is now the director. Here, Teller framed the photos to incorporate humorous extended quotes relating to their creation. Of a photo of a young man in swimming trunks, Teller writes:

It was boiling hot in the Ukraine, swimming in the filthy river Dniepr, which flows through Kiev. In the Ukraine, one says the women are excellent. I thought the men were much better. Fascinated from their round faces and their huge bellies. I felt good there, going in that direction myself anyway, belly concerned. The best fashion item I’ve ever seen on the street was this guy with plastic slippers and dodgy Speedos, a hand on the front and the words: “Touch me!” I couldn’t believe it and thought: I could learn something from him.

I couldn’t help but be on the lookout for that man and his coveted swimsuit when I found myself in Kiev last May. The ubiquitous flowering chestnut trees pointed to spring but the heat of the day was far more akin to summer, and the sandy banks of the islands in the middle of the Dnieper River were already home to sun worshipers and swimmers. I had been invited to spend three days there as part of a somewhat random delegation of media, fashion, music and art world representatives for a series of events taking place at the frighteningly exclusive fashion emporium Sanahunt, where the mega-wealthy of Ukraine go to pick up the seasonal must haves.

Teller had found his swimmer and many other subjects in his Ukraine series in Gidropark, a recreational complex of beaches, concert sites, dance floors and outdoor exercise areas built on an island in the Dnieper in 1968. Coincidentally, this is exactly where the Ukrainian-born photographer Yelena Yemchuk returned in the summers of 2005-08 in search of memories of her childhood. Yemchuk, who is now based in New York, recalls the trauma of being uprooted in her teens when her family decided to start a new life in America. The country of her youth was still part of the Soviet Union, but her memories of it are almost utopian — endless summers spent in idle play with friends on the banks of the Dnieper, which separates old Kiev with its wooded skyline of golden domed cathedrals and monasteries on the Right Bank from its Left Bank Soviet-era sibling. In “Gidropark,” a book of black and white photos recently published by Damiani, she captures a city idling between the past and the present.

Given her age and her agenda, one could accuse Yemchuk of looking at her homeland through a rose-colored lens (just as one could accuse Teller of looking at Kiev through designer sunglasses), but it’s a view that even an outsider can appreciate. After I returned home I was happy to come across an intimate book of color photographs by the young Italian photographer Federico Claravino. Claravino had visited Ukraine multiple times and his book, “Ukraina Pasport,” which takes the form of Ukrainian passport, is full of gentle observations of everyday moments captured over a three-year period. “My lasting impressions of the country are very closely linked to what I think I can easily sum up in the word ‘nostalgia,’” he told me. “Don’t get me wrong here. I’m not saying that people miss ‘the good old days’ of the Communist regime. What I mean is that it hasn’t yet been processed, that, in my opinion, the people of Ukraine are historically mourning, as in almost every ex-Soviet nation.”

Indeed, last week saw the opening of “Ostalgia” at the New Museum. The title is a play on the German word “Ostalgie,” which came to be used in the 1990s to describe a general sense of longing for the days of the Soviet Union. I had not heard this word before, but its sentiments perfectly echoed Clavarino’s. The exhibition includes 50 artists from 20 countries across Eastern Europe and the former Soviet Union, including Ukraine. They vary widely in age. The youngest had no real experience of the Soviet regime, while the older artists must find this notion of longing rather confusing and even occasionally absurd.

After his intense period spent making the work for the Biennale, Teller could think of nothing but returning to continue to photograph and perhaps make a book on Ukraine. But, sidetracked by numerous other commissions, he has yet to make it back. It is in some ways a testament to the virulent nature of the Soviet regime that 20 years after its breakup it still manages to cast a spell. For now the question “Where is Ukraine going?” remains as open-ended as the question “Where has it gone?”