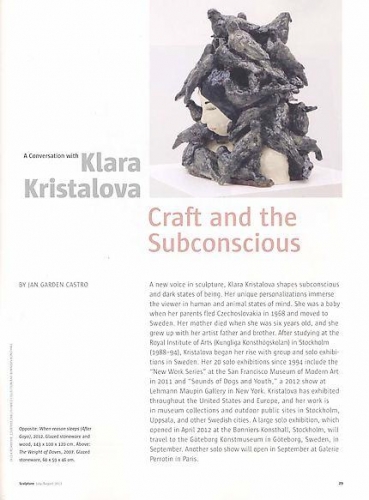 Klara Kristalova: Craft and the Subconscious
By Jan Garden Castro


A new voice in sculpture, Klara Kristalova shapes subconscious and dark states of being. Her unique personalizations immerse the viewer in human and animal states of mind. She was a baby when her parents fled Czechoslovakia in 1968 and moved to Sweden. Her mother died when she was six years old, and she grew up with her artist father and brother. After studying at the Royal Institute of Arts (Kungliga Konsthögskolan) in Stockholm (1988–94), Kristalova began her rise with group and solo exhibitions in Sweden.  Her 20 solo exhibitions since 1934 include the “New Work Series" at the San Francisco Museum of Modern Art in 2011 and "Sounds of Dogs and Youth," a 2012 show at Lehmann Maupin Gallery in New York. Kristalova has exhibited throughout the United States and Europe, and her work is in museum collections and outdoor public sites in Stockholm, Uppsala, and other Swedish cities. A large solo exhibition, which opened in April 2012 at the Bonniers Konsthall, Stockholm, will travel to the Göteborg Konstmuseum in Göteborg, Sweden, in September. Another solo show will open in September at Galerie Perrotin in Paris.


Jan Garden Castro: You told Art World (June/July) that your work is about psychological transformations and folk tales.  Could you give an example of how you approach a particular work? Do you start with an image in your head, a story idea, a feeling, or something else?

Klara Kristalova: I have many influences in addition to the transformations and folktales, including overheard conversations, daily life, movies, music, and other artists' work. I start with an image in my head, a feeling, or, of course, a story idea that affects me. It's a mix-it has to be shifting, strong content that can be visualized in an interesting way. I think, then I do drawings, notes, and key words; then I do more drawings, watercolors, and collages.


I collect the ideas, put them on my wall, and go through them. I try to put them into groups, varied by size and expression. I want dynamic groups, where the perspective is shifting, from inside to more distanced. Then I start to build. Most often, I do several versions, for safety and practical reasons-because parts might break-buteven more because I realize details that have to be changed while I am building the work.

JGC: Could you discuss Redhead (2005), which shows a female figure with o red skirt and a red bucket on her head and Flod (Flood,2006)? What did they refer to when you were creating them?

KK: Redhead is hiding, shining and attractive but not wanting to have her face (or personality) revealed. I was thinking of the period when you go from childhood into adulthood-when you become an object, against or with your will, the price you have to pay when you have to adjust and adapt (or do we?) to the group in high school. The integrity that we have as children, the rich possibilities of pre-adolescent inner life (as I remember it), and the price of adaptation all interest me.


Flod was inspired by an everyday thing. I was out, having drinks, and talked too much, or thought I did the day after. The flood of words coming out is beautiful in some ways because it attempts to communicate, but it's also too much.

JGC: Could you discuss losing your mother when you were young, being raised by your father, and finding your voice as an artist? Were these all different, critical turning point in your life?

KK: Losing my mother shaped me as a person in all possible ways. It's hard to overlook that impact, and it made me dependent on my father. He seemed to not want my brother and me to be artists (though he's an artist, too, now)
because of the not-so-easy economic aspects and the cultural climate in Sweden. But at the same time, it was very natural to our daily lives and seemed like the most natural profession. I thought I wanted to be a vet or an interpreter


In my 20s, after I came home from a trip across the U.S., I was tired and had lost all inspiration about what I would become. Then, surprisingly, my father talked me into art studies. I worked in his studio before they accepted me into the Royal Institute of Arts. I didn't find my own voice until my father died in 1999. He was very involved during my studies and afterwards. We were very close, and it was hard to separate. I wanted to, but couldn't, because or our history. The strong feeling that I have now in my work-that I don't want to be part of anything, that I want to float between genres, not fitting in-comes from this difficult relation with my artist father.

JGC: Martina Lowden, in the book Klara Kristalova (Paris: Perrotin, 2010) said, "Klara's figures seem to be entering a nightmare…a vase tips over, o scarlet hand emerges from within a bunch of roses…and a girl is being transformed into a birch." She is discussing particular works, including Now (2000), the Rotten (2007), and Young Birch (2010). Could you describe their inspirations and beginnings?

KK: Now is a falling. It's about losing control, letting things happen. This is very hard for me. I'm a control a control person, and it's catastrophic and dramatic just letting go, even in small scale. I like this work; it's beautiful and romantic, but at the same time, a bit shabby and simple. With The Rotten, I wanted a group of clumsy, roughly made objects, and it started as that, but then I thought about a certain situation with my colleagues, one in which I felt very young, stupid, and not intellectual enough. I looked for information and a way to fit in, but failed. And I linked these ideas. It's banal, but I like it.


Young Birch is part of a series related to birches. I don't love these trees. They grow everywhere where I live and soak up all of the water from my plants, but they are so beautiful in color and also a symbol for youth -for me, at least, since they grow fast and don't get very old. The old name for our house is Björkskogen, which means "the birchwood". Young Birch is about growing, but at the same time being stuck in the wood.

Living in the country is very complicated. I love the good structure that it creates for work, the peaceful surroundings, which are practical, fresh, and cheap. But at the same time, it's boring, lonely, and cold. It's like being stuck in a fight or stuck growing, or both.


JGC: Your dark images are beautiful and also call forth the subconscious.

KK: All are equally important parts of my work. Without the dark, there is no depth, no resonance, and I am very afraid of death. The craft is essential; I can't think without moving my hands. A day without hard hand work is a lost day. Craft is life for me. The subconscious has to be a part of the changes that i make in the work. The intuitive feeling about when it's good, or when it is not ready, is an important measure.


JGC: Your most ambiguous works are among the scariest, Silly Boy (2007) is a boy's face with weepy eyes and traces of red (blood?) around the mouth and nose. Days and Nights (2007) shows a face covered with moths.


KK: Silly Boy has no blood around his mouth and nose, it's reddish skin-winter's dry-ness creates sore skin here in the north. He is a bit ugly, insecure, a pathetic figure-very easy to identify with, I think-a character from daily life. It's very good but almost funny that you find him among the scariest. Days and Nights is very dramatic. It comes from an evening here on our veranda years ago, when a group of very large moths, almost the size of hummingbirds, suddenly came to drink from the honeysuckle. First, I was amazed by their beauty. Then i saw their legs and faces and understood how they created a perfect image of fantastic beauty, wonder, disgust, and death.