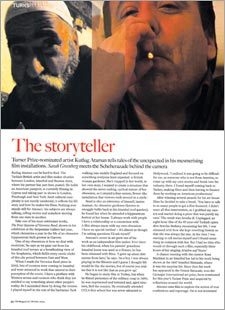 Turner Prize-nominated artist Kutlug Ataman tells tales of the unexpected in his mesmerising film installations. Sarah Greenberg meets the Scheherazade behind the camera

Kutlug Ataman can be hard to find. The Turkish-British artist and film-maker shuffles between London, Istanbul and Buenos Aires, where his partner has just been posted. He holds an American passport, is currently filming in Cyprus and taking part in shows in London, Pittsburgh and New York. Such cultural complexity is not merely incidental; it reflects his life story and how he makes his films. Nothing ever stands still for Ataman: his subjects are always talking, telling stories and somehow moving from one state to another.

Take one of his most celebrated works, The Four Seasons of Veronica Read, shown in his exhibition at the Serpentine Gallery last year, which chronicles a year in the life of an obsessive hippeastrum bulb grower in Harrow.

'One of my obsessions is how we deal with exoticism,' he says as we gaze out from his Istanbul roof terrace at a breathtaking view of the Bosphorus, which fulfils every exotic cliché of this city poised between East and West.

'When I made the Veronica Read piece in 2002, lots of curators were coming to Istanbul and were attracted to work that catered to their perception of the exotic. I have a problem with Western artists and curators who think they are entitled to say something about other people's reality. So I mimicked them by doing the reverse. I played myself in the role of the barbarian Turk walking into middle England and focused on something everyone least expected: a British woman gardener. She's trapped in her world, in her own story. I wanted to create a structure that showed the never-ending, cyclical nature of her obsession, so I created a four-screen, flower-like installation that viewers walk around in a circle.'

Read is also an extension of himself, insists Ataman. An obsessive gardener (known to smuggle bulbs back to his Istanbul roof-garden), he found her when he attended a hippeastrum festival at her house. 'I always work with people I have a relationship or a connection with. A film always starts with my own obsession. I have no special method -- it's almost as though I'm asking questions I'd ask myself'

Ataman's career in art grew our of his work as an independent film-maker. Ever since his childhood, when his parents' grandiose Istanbul home was used as a filmset, he has been obsessed with films. 'I grew up about 500 metres from here,' he says. 'As a boy I was always playing in the filmsets and I guess I thought life would be like the movies, but of course you realise that it is nor like that as you grow up.'

He began to study film in Turkey, but when he filmed protesters of the military coup in 1980, he was imprisoned and tortured and, aged nineteen, fled the country. He eventually attended UCLA film school but was never attracted to Hollywood. 'I realised it was going to be difficult for me, as someone who is nor from America, to come up with my own stories and break into the industry there. I found myself coming back to Turkey, making films and then leaving to finance them by working on American productions.'

After winning several awards for his art house films he decided to take a break. 'You have to talk to so many people to get a film financed. I didn't want all that intervention, so I grabbed my camera and started doing a piece that was purely my own.' The result was Semiha B. Unplugged, an eight-hour film of the 87-year-old Turkish opera diva Semiha Berksoy recounting her life. I was obsessed with how she kept rewriting history so that she was always the star. Ar the time I was starting to tell stories myself and I found something in common with her. But I had no idea who would sir through such a film, especially three hours of her singing Ariadne auf Naxos.'

A chance meeting with the curator Rosa Martinez in an Istanbul bar led to his work being shown at the 1997 Istanbul Biennale, where it was the surprise hit. Since then his work has appeared in the Venice Biennale, won the Carnegie International art prize, been nominated for this year's Turner Prize and acquired by collections around the world.

Ataman uses film to explore the notion of true confessions and reportage. He is not interested in facts. 'I have always been fascinated by how people fictionalise their lives, how they tell stories and act them our. In one way my work is a documentation because I am actually filming people. But my works are always once removed. There is never an illusion of reality. The viewer can always see the hand of the puppeteer, so to speak, whether it's the machinery, my voice or my face reflected in a mirror. I don't want people to sir back and ear popcorn and watch a story, I want them to be challenged. I don't believe in art that is simply beautiful -- if you have a very beautiful image I think it says there should be beauty in the world, and that is also an intellectual message.

For his new film installation Twelve, part of Tate's Turner Prize exhibition, Ataman traveled to a community on the Turkish/Syrian border where people believe in reincarnation. The film shows six people who believe they have been reborn and all are called 'double-bound', meaning two lives within one cover. It is projected onto six double-sided screens to emphasise the notion of dual identities and create the jarring impression of two lives placed on top of each other. 'Language is nor sufficient to explain this phenomenon. The sound from one screen bleeds into another and creates cacophony. To me this implies democracy -- everybody's talking but nobody can communicate.'

He recently won the Carnegie International Prize for Kuba, an Artangel commission, opening in London in March. It reveals an alternative, rebel underworld in Istanbul, populated mainly by Kurds. 'Nobody knows why these people call themselves Kubans but there is a mythology around it which fascinates me. It doesn't exist on any map of Istanbul, but taxi drivers know nor to go there and criminals know not to mess with Kubans. For me making Kuba was important, because I am attempting to show real people from the other side of society: murderers, prostitutes and political activists, and you never know whether anybody is telling the truth. Like any society, Kuba has the kings and it has the fools.' To those who ask whether he purposely seeks out crazy or marginalised people in his films, Ataman replies, 'These people aren't crazy. For Twelve, I went to a community of three million people who all believe in rebirth and only chose six. We are all getting crazier the older we get, the more we live in the world and see what can happen in it. Art is therapeutic.'