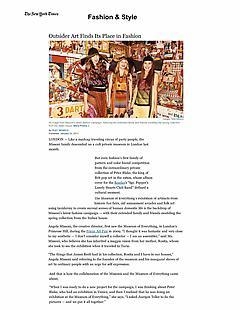 LONDON — Like a madcap traveling circus of party people, the Missoni family descended on a cult private museum in London last month.

But even fashion’s first family of pattern and color found competition from the extraordinary private collection of Peter Blake, the king of Brit pop art in the 1960s, whose album cover for the Beatles’s “Sgt. Pepper’s Lonely Hearts Club Band” defined a cultural moment.

The Museum of Everything’s exhibition of artifacts from historic fun fairs, old amusement arcades and folk art using taxidermy to create surreal scenes of human domestic life is the backdrop of Missoni’s latest fashion campaign — with their extended family and friends modeling the spring collection from the Italian house.
Angela Missoni, the creative director, first saw the Museum of Everything, in London’s Primrose Hill, during the Frieze Art Fair in 2009. “I thought it was fantastic and very close to my aesthetic — I don’t consider myself a collector — I am an assembler,” said Ms. Missoni, who believes she has inherited a magpie vision from her mother, Rosita, whom she took to see the exhibition when it traveled to Turin.
“The things that James Brett had in his collection, Rosita and I have in our houses,” Angela Missoni said referring to the founder of the museum and his inaugural shows of art by ordinary people with an urge for self expression.

And that is how the collaboration of the Missonis and the Museum of Everything came about.

“When I was ready to do a new project for the campaign, I was thinking about Peter Blake, who had an exhibition in Venice, and then I realized that he was doing an exhibition at the Museum of Everything,” she says. “I asked Juergen Teller to do the pictures — and we put it all together.”

So on a bleak winter day, the patriarch Tai Missoni with Rosita, daughter Angela, sons Vittorio and Luca and the vast cousinhood they have spawned, sat at long tables lunching, as if al fresco in Italy. To the mix were added various friends from Joan Burstein, the founder of Browns boutique, to the former Brazilian model Andrea Dellal, and Tatiana Santo Domingo and Eugenie Niarchos from the hip international set of Margherita Missoni and her sister Teresa.

“I said ‘no’ to every other fashion brand, as well as magazines,” Mr. Brett said. “I was afraid they would turn the museum into a film set and the art into a bunch of props. But this was different, with every member of the family modeling, from 19 to 80. It all made sense and has been more like an artistic collaboration than a traditional campaign.”

For all the energy of photographer Juergen Teller’s images, it is the face off between the family and the weird and wondrous art that creates the artistic tension. There are fairground games, line ups of meticulously painted (if now politically incorrect) Punch and Judy puppets, model railways or seaside boxes smothered in shells. Then there is the fascinating, but creepy, woodland dioramas from the Victorian Walter Potter, who used stuffed squirrels, mice and birds playing cards or cricket or holding tea parties, in scenes created in glass cases.

“It’s amazing isn’t it? When you see something separately it becomes extraordinary,” is one of Peter Blake’s comments written beside the objects.
But it is Mr. Brett who has made this strangely compelling amateur art into a genre, that will even be shown this year as an exhibition at the Garage Center for Contemporary Culture in Moscow. This will include a pan-Russian search for unknown “outsider” talent.

Outsider art was the starting point for Mr. Brett’s collection of work, which he describes at being “made by mediums and mystics or people with disabilities” and from environments “in the middle of nowhere.”

“I’d been looking at lots of Southern folk art from the United States — odds and ends found in nooks and crannies across the deep south — strange and brilliant, immediate and unpretentious,” Mr. Brett said.

“The best work seemed to be made by farmers and preachers and laborers — blue-collar folk,” he adds. “I guess what attracted me was the purity and directness. There was a connection to other homespun American art forms like jazz — not quite naïve, but vernacular — made by people without formal training and made for its own sake rather than for sale or career.”

Mr. Brett, a movie maker and property developer, found the empty industrial space, formerly a dairy and then a recording studio, and used it to test the idea that “people art” — unearthed from countries as diverse as Japan or Sri Lanka — might resonate today.

Mr. Brett aspires to catch the intensity and emotion of the artist at the moment of creation. He is now preparing an exhibition of art by people with physical and mental disabilities.

“The Museum of Everything is there to engage and entertain and take you on a journey,” Mr. Brett said. “I want people to experience something — to feel rather than think — and Peter feels exactly the same with his show.”

The Museum of Everything’s exhibition runs until mid-February.