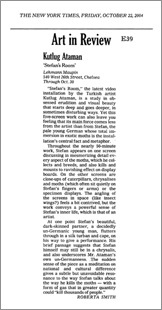 "Stefan's Room," the latest video installation by the Turkish artist Kutlug Ataman, is a study in obsessed erudition and visual beauty that starts deep and goes deeper, in sometimes disturbing ways. Yet this five-screen work can also leave you feeling that its main force comes less from the artist than from Stefan, the pale young German whose total immersion in exotic moths is the installation's central fact and metaphor.

Throughout the nearly 50-minute work, Stefan appears on one screen discussing in mesmerizing detail every aspect of the moths, which he collects and breeds, and also kills and mounts to ravishing effect on display boards. On the other screens are close-ups of caterpillars, chrysalises and moths (which often sit quietly on Stefan's fingers or arms) or the specimen displays. The angling of the screens in space (like insect wings?) feels a bit contrived, but the work conveys a powerful sense of Stefan's inner life, which is that of an artist.

At one point Stefan's beautiful, dark-skinned partner, a decidedly un-Germanic young man, flutters through in a silk turban and cape, on his way to give a performance. His brief passage suggests that Stefan himself may still be in a chrysalis, and also underscores Mr. Ataman's own un-Germanness. The sudden sense of the piece as a meditation on national and cultural difference gives a subtle but unavoidable resonance to the way Stefan talks about the way he kills the moths - with a form of gas that in greater quantity could "kill thousands of people."