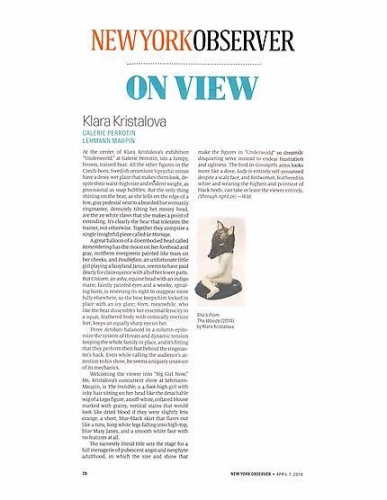 Klara Kristalova at Galerie Perrotin and Lehmann Maupin
By: Will Heinrich


At the center of Klara Kristalova’s exhibition “Underworld,” at Galerie Perrotin, sits a lumpy, brown, trained bear. All the other figures in the Czech-born, Swedish ceramicist ’s psychic circus have a dewy wet glaze that makes them look, despite their waist-high size and evident weight, as provisional as soap bubbles. But the only thing shining on the bear, as she lolls on the edge of a low, gray pedestal next to a bearded but womanly ringmaster, demurely tilting her mousy head, are the 20 white claws that she makes a point of extending. It’s clearly the bear that tolerates the trainer, not otherwise. Together they comprise a single insightful piece called Le Mariage.


A great balloon of a disembodied head called Remembering has the moon on her forehead and gray, northern evergreens painted like tears on her cheeks, and Doubleface, an unfortunate little girl playing a fairyland Janus, seems to have paid dearly for clairvoyance with all of her lower parts. But Unicorn, an ashy, equine head with an indigo mane, faintly painted eyes and a wonky, spiraling horn, is reserving its right to reappear more fully elsewhere, so the bear keeps him locked in place with an icy glare; Siren, meanwhile, who like the bear dissembles her essential ferocity in a squat, feathered body with comically oversize feet, keeps an equally sharp eye on her.


Three Acrobats balanced in a column epitomize the system of threats and dynamic tension keeping the whole family in place, and it’s fitting that they perform their feat behind the ringmaster’s back. Even while calling the audience’s attention to his show, he seems uniquely unaware of its mechanics.


Welcoming the viewer into “Big Girl Now,” Ms. Kristalova’s concurrent show at Lehmann Maupin, is The Invisible, a 4-foot-high girl with inky hair sitting on her head like the detachable wig of a Lego figure, an off-white, collared blouse marked with grainy, vertical stains that would look like dried blood if they were slightly less orange, a short, blue-black skirt that flares out like a tutu, long white legs falling into high-top blue Chucks, and a smooth white face with no features at all.


The earnestly literal title sets the stage for a full menagerie of pubescent angst and neophyte adulthood, in which the size and shine that make the figures in “Underworld” so dreamily disquieting serve instead to endear frustration and ugliness. The bird in Goosegirl’s arms looks more like a dove, Lady is entirely self-possessed despite a scaly face, and Birdwoman, feathered in white and wearing the highest and pointiest of black heels, can take or leave the viewer entirely.