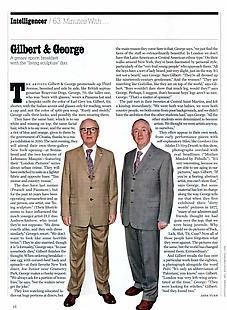 The artists Gilbert & George promenade up Third Avenue, besuited and side by side, like British septuagenarian Reservoir Dogs. George, 70, the taller one, who was “born with glasses,” wears a Panama hat and a bespoke outfit the color of Earl Grey tea. Gilbert, 69, shorter, with the Italian accent and glasses only for reading, wears a cap and suit the color of split-pea soup. “Rusty and moldy,” George calls their looks, and possibly the men wearing them.

They have the same hair, which is to say white and missing on top; the same facial hair, which is to say none; and the same tie, a riot of blue and orange, given to them by the government of Croatia, thanks to a major exhibition in 2010. The next evening, they will attend their own three-gallery New York opening—at Sonnabend and the two locations of Leh­mann Maupin—­featuring their “London ­Pictures” series about urban crime. They will have switched to suits in a lighter fabric and opposite hues: “Tan mouse and country mouse.”

The duo have last names (Proesch and Passmore), but for the past 45 years have been operating surnameless and as one person, one artist, one “living sculpture.” (Their lifestyle seems to have influenced the much younger artist-D.J. duo Andrew­Andrew, who insist they’re not copycats: “We dress exactly alike, and they only dress similarly.” George’s retort: “We don’t want to look like some horrible twins.”) They’re also married, though it is “a formality,” George says. “In case somebody dies,” Gilbert finishes the thought. When ordering breakfast—one egg with corned-beef hash and spinach—at their favorite New York diner, Joe Junior near Gramercy Park, George makes a cheeky request: “We always ask for a portion of homo fries,” he says, “but the waiters never get the joke.”

They love watching educated ladies eat huge portions at ­diners, but the main reason they come here is that, George says, “we just find the faces of the staff so extraordinarily beautiful. In London we don’t have this Latin American or Central American ethnic type.” On their walks around New York, they’ve been fascinated by personal style, particularly of the “very frail young people” who approach them. “All the boys have a sort of lady beard, just very slight, just on the way. It’s not not a beard,” says George. Says Gilbert: “They’re all dressed up like nineteenth-century gentlemen.” And the women? “They are marching like Godzillas, like they are on top of the world,” says Gilbert. “Boys wouldn’t dare show that much leg, would they?” says George. Perhaps, I suggest, that’s because boys’ legs aren’t so nice. George: “That’s a matter of opinion!”

The pair met in their twenties at Central Saint Martins, and felt a kinship immediately. “We were both war babies, we were both country people, we both come from poor backgrounds, and we didn’t have the ambition that the other students had,” says George. “All the other students were determined to ­become artists. We thought we were artists anyway, in ourselves.”

They often appear in their own work, from early performance pieces with ­self-explanatory titles, like Gordon’s Gin Makes Us Very Drunk, to this show, ­photographs ­overlaid with real headlines (“Mother Mauled by ­Pitbulls”). “It’s very ­interesting, because we are able to use aging in our ­pictures,” says Gilbert. “If you’re a ­boring abstract ­artist, you can’t show that,” says George. But some ­material has lost its charge along the way. George tells me that when they first ­exhibited their “dirty words” pictures in 1977, “many of our ­admirers and friends thought we had gone over the top, that we were being juvenile. Why should we do pictures of Fuck, Lick, Shit, Tit, Cunt? Now all of those people have for­gotten what they were against. The pictures stay the same, but the world has changed around them. Extraordinary.”

And Gilbert recalls the fuss over a particular work from the eighties, a photograph alongside the word Paki. “It’s only an abbreviation of ­‘Pakistani,’ you know,” says Gilbert. “London was very left-wing orientated at the time.” George: “They were looking for ­witches.” Gilbert: “And they found two.”