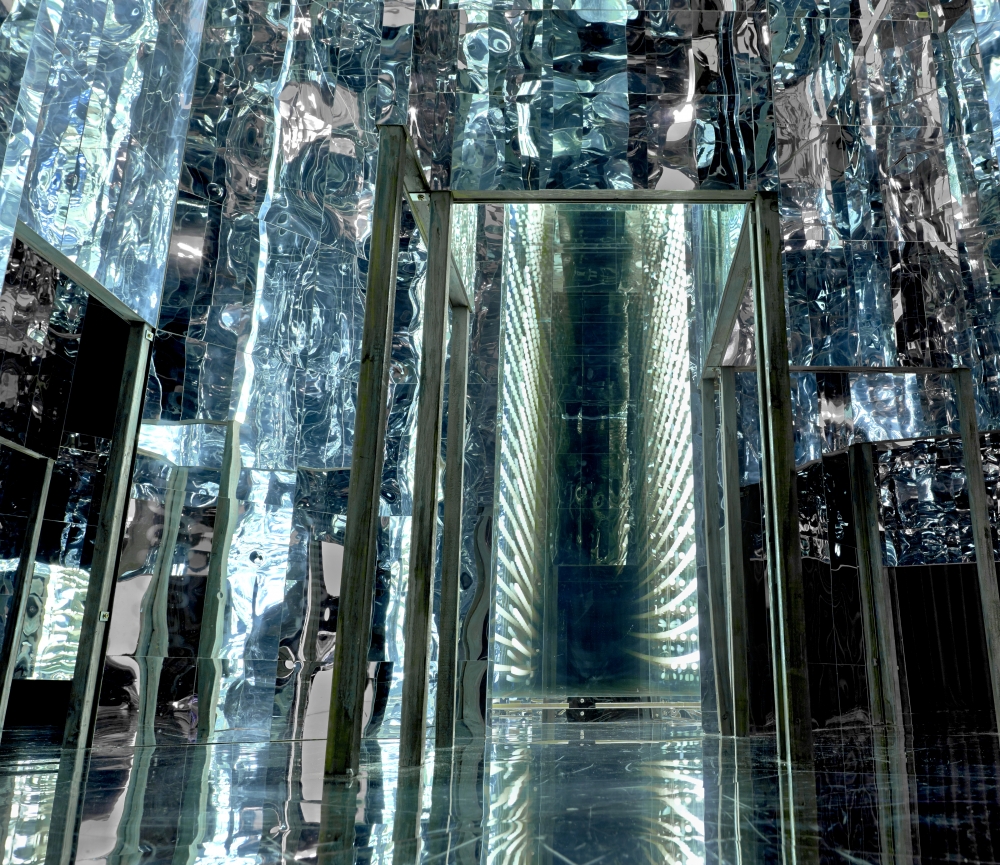 French philosopher Jacques Lacan once posited the idea that a paramount phase in human development involves the constant confrontation between the self and one's own reflection. Known simply as the mirror stage, the symbolic experience finds its rooted in the creation of the self and in the formation of the ego; in the mirror, we are at once divided into self-conscious creatures, autonomous beings, and passive observers.

It is in this dialectic that Lee Bul finds the inspiration behind her newest exhibition, Via Negativa II. For nearly three decades, the Yongju, South Korea-born contemporary artist has dazzled the world with her singularly technical, mechanistic sculptures—uncannily textured combinations of materials that reveal an inner world every bit as nuanced as the world in which her works debut. Since 1999, when Bul represented South Korea in the Venice Biennale, she's been a market-driving force in the elevation of Asian contemporary art to critical acclaim.

For Via Negativa II, Bul crafted an elaborate, immersive amalgamation of mirrors and metals at Lehmann Maupin which forces the viewer into direct conflict with her or his own perspectives, and echoes both the promises and fallibilities of technology. Perfect and imperfect, at once whole and fragmented, Bul hijacks the zeitgeist to create a sculptural commentary on technologies that are at once as objective as they are subjectively experienced.

Bul told us about some of the big-picture concepts that inspire her as an artist: "Our plans about utopia are undoubtedly going to fail. But as human beings, just because it's destined to fail doesn't mean we should stop dreaming about it. We need to keep trying, don't we?"

Via Negativa II is the perfect example of Bul's intrepid artistry. As simple as it is visually complex, her artwork forces the viewer into direct confrontation with perspective itself. In our interview, Bul explained, "Via Negativa’s basic form is a labyrinth. It’s in the form of very simple maze. It’s not that it has multiple exits, or is without the doors to exit, but by simply following the path, eventually you will find a way out of it. The only thing is that I built the walls with mirrors. When the viewer actually goes in there, although it has a very simple path, all the reflections, mirrored images create endless fictional paths. Within it, the viewer sees himself in parts and continuously experiences the fragments of his own self."

Part of the structure's facade is adorned with disordered pages from a text that speaks to Bul's ideas on the formations of self-consciousness. "My intention is not to have people read the words," Bul tells us, "but when we manage to read it partially, even with difficulty, some of the words would pop out. Then, the viewer can catch a glimpse of something like a reference to the origin of consciousness.

"Ah, Julian Jaynes," she sighs, recalling a particular source of inspiration. "Originally, humans thought that self-consciousness was either their own thought, or the voice of God. As people’s lives began to get more complicated, the two territories have become connected and, while going back and forth between the two self-consciousnesses, we look and review [the ways in which] our selves come about."

The show at Lehmann Maupin also incorporates six other sculptures by the artist. Explains Bul, "The works I show this time could be categorized into a few kinds. Probably the biggest subject of it could be self-consciousness. [The subject is] all about the questions about such issues. Different works are put together so that they can be approached through completely different mediums, and different experiential methods. Since the techniques and things seem too far different at a glance, one can question about how they are related. Naturally, through their own questions, I think the viewer can have a chance to think about or experience the certain ideas that penetrate this entire structure."

Bul punctuated that thought with the note that she believes it's more important to give the viewer the chance to experience their own interpretations and experiences away from her own intentions. "I sometimes have these thoughts nowadays that what we think or believe is ourselves, is actually a reflection of ourselves that we accept without hesitation. I wonder how we saw ourselves before we had mirrors in front of us."