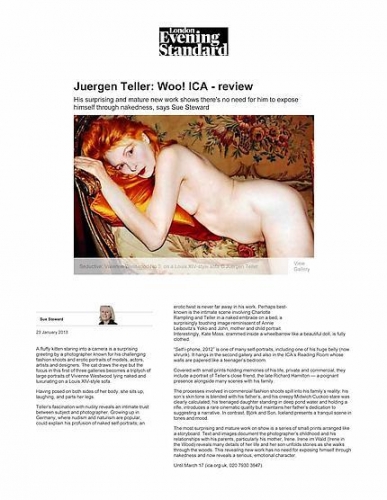 Having posed on both sides of her body, she sits up, laughing, and parts her legs.

“Self i-phone, 2012” is one of many self-portraits, including one of his huge belly (now shrunk). It hangs in the second gallery and also in the ICA’s Reading Room whose walls are papered like a teenager’s bedroom.

Covered with small prints holding memories of his life, private and commercial, they include a portrait of Teller’s close friend, the late Richard Hamilton — a poignant presence alongside many scenes with his family.

The processes involved in commercial fashion shoots spill into his family’s reality: his son’s skin tone is blended with his father’s, and his creepy Midwich Cuckoo stare was clearly calculated; his teenaged daughter standing in deep pond water and holding a rifle, introduces a rare cinematic quality but maintains her father’s dedication to suggesting a narrative. In contrast, Björk and Son, Iceland presents a tranquil scene in tones and mood.

The most surprising and mature work on show is a series of small prints arranged like a storyboard. Text and images document the photographer’s childhood and his relationships with his parents, particularly his mother, Irene. Irene im Wald (Irene in the Wood) reveals many details of her life and her son unfolds stories as she walks through the woods. This revealing new work has no need for exposing himself through nakedness and now reveals a serious, emotional character.