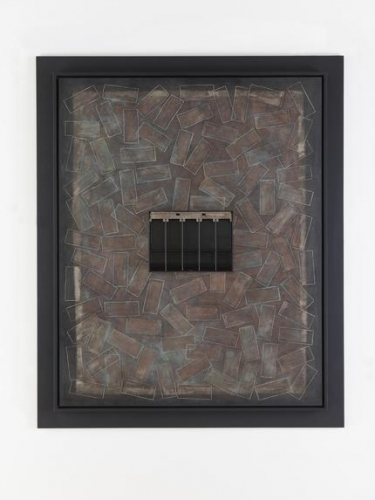 The title of Nari Ward’s exhibition, TILL, LIT, at Lehmann Maupin gallery is a pun that works in several valences, each devolving from how you read the two words. Reading “till” as a noun gets you the UK version of a cash register, but you can also read it as an abbreviation of “until.” “Lit” might mean illuminated, or, in the vernacular, popping — that is, fun and amazing, or intoxicated. Is the cash drawer having light thrown on it? Or will something (as yet unnamed) persist until it’s set on fire, or is primed with alcohol and drugs?

The artworks in the exhibition engage with all these readings. They allude to and signify those key systems of social organization that we can’t seem to escape: race and class. Money (which goes to the till after transactions are completed) mediates our racial and classist interactions, which effectively become transactions when money is involved. It can buy us out of our racial privations and into classist privilege. But this exhibition points to a structural shift that would allow us to transcend that penny-ante game.

Upon entering the gallery, one is greeted with a series of paintings, each containing one letter, that together spell out “Reparations.” Now I know I’m in the middle of a conversation about currency. By using this term, Ward indicates he is dealing with the issue of deprivation and the desire to right historical wrongs — wrongs which have much to do with who, historically, has had intellectual, social, economic, currency, and who has not.

His paintings have the thin outline of US paper currency stamped all over the surfaces. And in the middle of each large painting, eight in all, is an actual cash drawer. Dolla, dolla bill y’all. It’s all about the Benjamins. You got the ducats? All the silly TV show references to money and what it might bring come back to me as I look at the work — the programs I grew up with that enthusiastically treated money as a panacea and a way out of whatever hood was being portrayed. There was even the short run of a show that promised to follow lottery winners, chronicling how their lives had changed once they got money.

Even the paintings with cowry (or cowrie) shells remind me that these naturally occurring objects were once instruments of payment. These works, like “Providence Spirits (Gold)” (2017), are the most lovely objects in the show and are meant to stand out as carry horses for the metaphor of wealth and the gap between the lives these heavily aestheticized and finely crafted paintings represent and the lives (alluded to in other rooms) that are deemed worth significantly less.

In a different room, a set of generator units typically used to illuminate under-lit corners of poor and working-class housing developments is lain on the floor of the gallery. I have seen them set up in the neighborhood where I live in the South Bronx, at the housing project two blocks from me. They are deployed to deter the crime. In fact, last year Mayor Bill de Blasio endorsed a study undertaken with the residents of 40 public housing developments in the city to reportedly “examine the effect of different lighting installation strategies on crime reduction.” However, researchers have pointed out that lighting up these spaces like a surgical theater only emphasizes that they are less appealing, less valuable, and even dangerous, thus ultimately signifying economic inequality. In the gallery, the lights are turned towards the floor, so don’t function as they normally would, but the buzzing of the generator that runs them can’t be ignored and makes me want to leave. To further evoke the dead end-ness of these housing schemes, Ward has placed nearby a ladder filled with frozen cement, so there’s no use for it, except as a symbol for the impossibility of getting a leg up on the higher rung of the socioeconomic ladder. And behind the cemented ladder are large metal bins filled with broken votive candles — the people who live under these lights have prayers and wishes that lie smashed in bins, like their dreams.

The exhibition illustrates how a lack of currency ripples out in resource-poor, urban environments that are dark and getting darker. The hot lights which make the room inhospitable only highlight the wretchedness of those referenced places. What I get from Ward’s show feels like well-traveled territory. Yet, I think it cannot be said enough: Until we find a way to cultivate economic equity we are doomed to treating each other like prizes, assets, as instruments for acquiring wealth, or by the same token, impediments to living large.

Hyperallergic
Back To Top