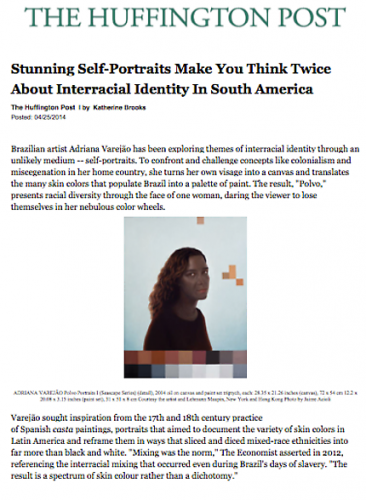 Brazilian artist Adriana Varejão has been exploring themes of interracial identity through an unlikely medium -- self-portraits. To confront and challenge concepts like colonialism and miscegenation in her home country, she turns her own visage into a canvas and translates the many skin colors that populate Brazil into a palette of paint. The result, "Polvo," presents racial diversity through the face of one woman, daring the viewer to lose themselves in her nebulous color wheels.

Varejão sought inspiration from the 17th and 18th century practice of Spanish casta paintings, portraits that aimed to document the variety of skin colors in Latin America and reframe them in ways that sliced and diced mixed-race ethnicities into far more than black and white. "Mixing was the norm," The Economist asserted in 2012, referencing the interracial mixing that occurred even during Brazil's days of slavery. "The result is a spectrum of skin colour rather than a dichotomy."

Defining the spectrum was a Euro-centric obsession, one that resulted in an elaborate system of castes -- white Spanish at one end and those of African or indigenous descent at the other -- that had social, cultural and economic implications. The lighter skinned individuals existed at the top of the socio-economic pyramid, with better jobs and higher standards of living, while their darker skinned counterparts sank to the bottom.

The legacy of this classification persists in Brazil, a country seen less as a "racial democracy" and more as a purveyor of segregation. And interracial identity remains a potent issue, particularly since black and mixed-race people officially outnumber white citizens, according to a 2010 census. "Brazil is a country where non-whites now make up a majority of the population," NPR's Melissa Block reiterated in a 2013 story. "It's one of the most ethnically diverse countries in the world; home to 97 million African descendants -- the largest number of blacks outside Africa."

Here -- in this complex historical context -- is where Varejão kicks off her project. Her self-renderings stare back at the viewer, like a traditional work of portraiture, flanked by a number of color blocks constantly reminding us to pore over the tones in the figures' skin. Those tones are deliberate, plucked from a 1976 racial census in Brazil that asked citizens to describe their own skin color. The survey produced 136 different descriptions, ranging from "Sapecada" (flirting with freckles) to "Café com Leite" (milky coffee) and "Queimada de Sol" (sun kissed). The artist chose her pigments based on this selection, painting herself in each constructed identity.

Along with the portraits, Varejão's project includes the set of oil paints she used in the series, a flesh-toned kit she's dubbed "Polvo," the Portuguese word for Octopus. "The logo of the octopus was chosen as its dark-colored ink consists primarily of melanin," Lehmann Maupin gallery explains, "the same natural pigmentation found in human hair and skin."

The portraits differ greatly from Varejão's other, more gory sculpture work, which blends eroticism and violence in ways that harken back to Brazil's history of sexual aggression. Yet a penchant for reappropriating art history -- with a constant eye on the inequities of the past -- permeates most of the artist's work, regardless of the medium. "Varejão's meaty mash-up of art history, sex and brutality has made her one of Brazil's foremost artists," The Guardian's Skye Sherwin wrote.

"Polvo" will be on view at Lehmann Maupin's Chelsea location from April 24 to June 21. You can check out a preview of the works here and let us know your thoughts on the exhibition in the comments.