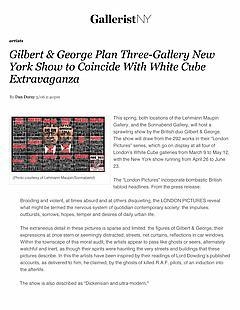 This spring, both locations of the Lehmann Maupin Gallery, and the Sonnabend Gallery, will host a sprawling show by the British duo Gilbert & George. The show will draw from the 292 works in their “London Pictures” series, which go on display at all four of London’s White Cube galleries from March 9 to May 12, with the New York show running from April 26 to June 23.

Brooding and violent, at times absurd and at others disquieting, the LONDON PICTURES reveal what might be termed the nervous system of quotidian contemporary society: the impulses, outbursts, sorrows, hopes, temper and desires of daily urban life.

The extraneous detail in these pictures is sparse and limited: the figures of Gilbert & George, their expressions at once stern or seemingly distracted; streets, net curtains, reflections in car windows. Within the townscape of this moral audit, the artists appear to pass like ghosts or seers, alternately watchful and inert, as though their spirits were haunting the very streets and buildings that these pictures describe. In this the artists have been inspired by their readings of Lord Dowding’s published accounts, as delivered to him, he claimed, by the ghosts of killed R.A.F. pilots, of an induction into the afterlife.

The show is also described as “Dickensian and ultra­?modern.”