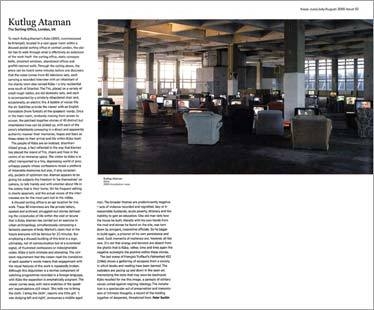 To reach Kutlug Ataman's Kuba (2005, commissioned by Artangel), located in a vast upper room within a disused postal sorting office in central London, the visitor has to walk through what is effectively an extension of the work itself: the sorting office, static conveyor belts, smashed windows, abandoned offices and graffiti-stained walls. Through the ceiling above, the piece can be heard some minutes before one discovers that the noise comes from 40 television sets, each carrying a recorded interview with an inhabitant of the shanty town also named Kuba -- a tiny residential area south of Istanbul. The TVs, placed on a variety of small rough tables, are old domestic sets, and each is accompanied by a similarly dilapidated chair and, occasionally, an electric fire. A babble of voices fills the air. Subtitles provide the viewer with an English translation (from Turkish) of the speakers' words. Once in the main room, randomly moving from screen to screen, the patched-together stories of 40 distinct but interrelated lives can be picked up, with each of the zones' inhabitants conveying in a direct and apparently authentic manner their memories, hopes and fears as these relate to their arrival and life within Kuba itself. The people of Kuba are an isolated, disenfranchised group, a fact reflected in the way that Ataman has placed the island of TVs, chairs and fires in the centre of an immense space. The visitor to Kuba is in effect transported to a tiny, depressing world of poor, unhappy people whose confessions reveal a plethora of miserable memories but also, if only occasionally, pockets of optimism too, Ataman appears to be giving his subjects the freedom to 'be themselves' on camera, to talk frankly and with emotion about life in the colony that is their home. Yet his frequent editing is clearly apparent, and the actual voices of the interviewees are for the most part lost in the mêlée.

A disused sorting office is an apt location for this work. These 40 interviews are like private letters, opened and archived; smuggled-out stories delineating the vicissitudes of life within the void or lacuna that is Kuba. Ataman has carried out an exercise in urban anthropology, simultaneously composing a fantastic example of Andy Warhol's claim that in the future everyone will be famous for 15 minutes. But employing a disused building of this kind is a sign, ultimately, not of communication but of a scrambled signal, of frustrated confessions or indecipherable codes. Kuba is both intimate and alienating. The constant requirement that the viewer read the translation of each speaker's words means that engagement with the visual features of the work is repeatedly broken. Although this disjunction is a normal component of watching programmes recorded in a foreign language, with Kuba the separation is emphatically poignant. The viewer comes away with mere snatches of the speakers' expostulations still intact: 'She tells me to bring the cloth. I bring the cloth', reports one little girl. 'I was dodging left and right', announces a middle-aged man. The broader themes are predominantly negative -- acts of violence recorded and regretted, lazy or irresponsible husbands, acute poverty, illiteracy and the inability to gain an education. One old man tells how the house he built, literally with his own hands from the mud and stones he found on the site, was torn down by arrogant, insensitive officials. So he began to build again, a prisoner of his own persistence and need. Such moments of resilience are, however, all too rare. It's not that energy and heroism are absent from the ghetto that is Kuba; rather, time and time again the negative outweighs the positive within these stories.

The last scene of François Truffaut's Fahrenheit 451 (1966) shows a gathering of escapees from a society in which books and reading have been banned. The outsiders are pacing up and down in the open air, memorizing the texts that may soon be destroyed. Kuba recalled for me this image, a panoply of solitary voices united against reigning ideology. The installation is a spectacular act of preservation and transmission of intimate thoughts, a record of the holding together of desperate, threatened lives.