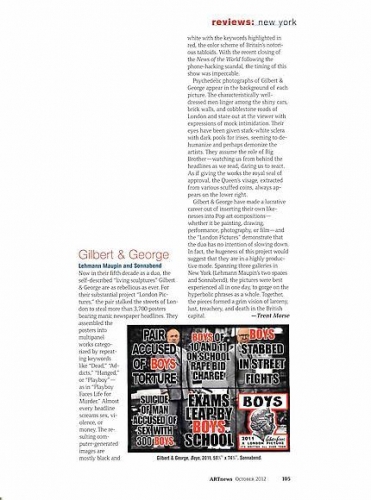 Now in their fifth decade as a duo, the self-described “living sculptures" Gilbert & George are as rebellious as ever. For their substantial project ”London Pictures,” the pair stalked the streets of London to steal more than 3,700 posters bearing manic newspaper headlines. They assembled the posters into multi panel works categorized by repeating keywords like "Dead," "Addicts," "Hanged," or "Playboy" -- as in "Playboy Faces Life for Murder." Almost every headline screams sex, violence, or money.  The resulting computer-generated images are mostly black and white with the keywords highlighted in red, the color scheme of Britain’s notorious tabloids. With the recent closing of the News of the World following the phone-hacking scandal, the timing of this show was impeccable.
Psychedelic photographs of Gilbert & George appear in the background of each picture. The characteristically well-dressed men linger among the shiny cars, brick walls, and cobblestone roads of London and stare out at the viewer with expressions of mock intimidation. Their eyes have been given stark-white sclera with dark pools for irises, seeming to dehumanize and perhaps demonize the artists. They assume the role of Big Brother-watching us from behind the headlines as we read, daring us to react. As if giving the works the royal seal of approval, the Queens visage, extracted from various scuffed coins, always appears on the lower right.

Gilbert & George have made a lucrative career out of inserting their own likenesses into Pop art compositions- whether it be painting, drawing, performance, photography or film-and the “London Pictures” demonstrate that the duo has no intention of slowing down. ln fact, the hugeness of this project would suggest that they are in a highly productive mode. Spanning three galleries in New York (Lehmann Maupin’s two spaces and Sonnabend), the pictures were best experienced all in one day to gorge on the hyperbolic phrases as a whole. Together, the pieces formed a grim vision of larceny
lust, treachery and death in the British capital.