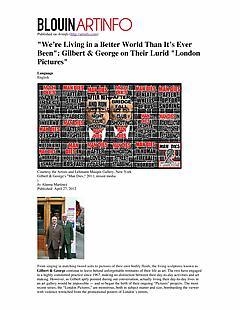 "We're Living in a Better World Than It's Ever Been": Gilbert & George on Their Lurid "London Pictures"
By: Alanna Martinez

From singing in matching tweed suits to pictures of their own bodily fluids, the living sculptures known as Gilbert & George continue to leave behind unforgettable remnants of their life as art. The two have engaged in a highly committed practice since 1967, making no distinction between their day-to-day activities and art making. However, as Gilbert aptly pointed during our conversation, actually living their day-to-day lives in an art gallery would be impossible — and so began the birth of their ongoing “Pictures” projects. The most recent series, the “London Pictures,” are monstrous, both in subject matter and size, bombarding the viewer with violence wrenched from the promotional posters of London’s streets.

While the show is not traveling, the complete work from the series is being divvied up and shown in shows at White Cube (London & Hong Kong), both Lehmann Maupin Gallery locations (New York), Sonnabend Gallery (New York), Galerie Thaddaeus Ropac (Paris and Salzburg), Galleria Alfonso Artiaco (Naples), Baronian Francey (Brussels), and the Bernier/Eliades Gallery (Athens) through November. They had all three New York openings last night. It seems fitting that they embark on a full-scale media campaign to promote this show about media hype.

The two maintained their usual demeanor of English gentleman — even so kind as to explain the nuances of the phrase “sex beast” — during ARTINFO’s recent interview with them. Here is what the famous duo had to say about London posters, life in a better world, and continuing to be Gilbert & George.

What do your “London Pictures” say about contemporary London? What did you learn by bringing together and tracking all these headlines?

George: Oh, so much — so many different things. First of all they’re not headlines, they’re actually posters from outside of the newsstands. We think they show the modern Western world: London, Paris, New York, or you could say North America, Europe, and Australia. It doesn’t really reflect Latin America, China, and Russia. We think that the works are not only there to show the modern life, but also to change it. Maybe the people that see the pictures will be a little bit different.

Gilbert: We are showing London in an amazing way. Everybody’s showing something, no? But we were able to show something, a townscape that is true. It’s not invented. Not one word is invented by us.

You developed an elaborate system for categorizing and presenting these headlines. What’s the point of arranging the subject matter this way?

Gilbert: I mean we had to find a way to make a system. First we had to get all these posters together. It took us six years, roughly three a day. So then it was around Christmas time that we decided to divide them up into subjects.

Gilbert: They decided the size of the picture.

Gilbert: For “Shooting” we only had three, so we were able to make a piece.

George: We always leave one empty for the title. For “Sex Beast” there were five, so we could do a six-part one. So in a way, it was partly automatic. The posters are black and white, that’s not because of us. Red is very good for highlighting, like a traffic signal. And the only other thing that ran through all of the posters was the human presence. So we added flesh.

Did you curate the posters, or take any out?

George: As near as possible, without interference. Only if we got four with the word shootings — we only need three for a four-part work. Four is not enough for the next size picture, so we would find which one of those three has another word that can transfer to a different picture. Sometimes, that was quite complicated. But we used every single poster. In the end we had accrued too many that we couldn’t use and so we did one called…

Gilbert & George (in unison): “Family Straight,” and “London Crime,” and they’re a mixture.

Gilbert: We had two special ones.

George: Exceptions, because we think whenever you have a rule, you need an exception to show that up.

These headlines are very dark, in terms of subject matter. Did you specifically pick out negative headlines, or is this just a picture of London tabloid culture?

George: No, that’s how it is. But they’re not tabloids strangely. The Sun, the Daily Mirror, and the Daily Star are the famous tabloids. They’re the lower class, violent, sexually aggressive newspapers. They don’t do posters. These are posters from the historic London evening newspapers, the Evening Standard, very famous, one of the first London city evening newspapers, and from two local papers, again very respectable, the North London newspaper and the Hackney Gazette. So strange that they’re not, but if the tabloids did do posters they would be more sensationalized. These are very plain spoken.

Gilbert: After all, it is the tragedy of life.

George: We’re just lucky it hasn’t happened to us.

Gilbert: Most of life is complicated, not easy, and happening with tragedy — trying to sort it out.

George: The most chilling and best book of Charles Dickens is the least read one, but its called “Hard Times” — extraordinary.

Are these hard times?

I was really struck by the scale of the “Pictures.” What does monumentalizing them in this way bring to the concept of the work?

Gilbert: These are not the biggest ones. There are much bigger in London! For us we want the picture to look down, to speak, and to look into the human person. Normally we go to a museum to look into a picture, and here the picture looks at you.

While walking through the gallery, the sensation I felt most strongly was that of being overwhelmed by the pieces.

Gilbert: Overwhelming them. That’s how it works, we always want to do that.

George: It’s subversion in a way

Gilbert: We always want to do a very big picture because we always feel if we are not able to get that viewer in the first second we are losing them.

You’re on kind of a world tour, presenting the “London Pictures” in Hong Kong, now New York, and Paris. Since they are specifically about London, do people respond to them differently in different places?

George: Some people like to be challenged. That’s why you go and buy maybe a different book to read. We don’t always want what’s the nicest thing in the world, all the time. Young people love to be challenged. We had posters in London printed, which we sold in the gallery for 10 or 20 pounds — they all love to buy a poster to annoy their parents, right? And the most distinctive one, people would say, was the picture of Islam, and that’s the one they all bought. People stopped and said “I got Islam!”

Gilbert: We sold so many posters in London that it shocked us totally. Because we made, well, we always did posters but not in New York because we felt we couldn’t sell them. There was no tradition. But in London there was a kind of tradition, so we did seven different ones, and in four weeks we nearly sold four or five thousand. It’s amazing!

Why wouldn’t you do the posters here in NY?

George: Well there’s no tradition, but maybe we should try it next time.

Gilbert: England has become this place now where ordinary people go to shows. It didn’t used to be like that. Now all the galleries, we had nearly, I think in two week, 15,000 people come to a private gallery. And that’s massive.

Gilbert: And that’s new in England. It was never like that. It’s all new the idea that ordinary people would go to shows. It used to be very limited. New York in some ways, in the '80s, they had a lot of people through the galleries. But now we feel, I don’t know — I don’t know how many people they have here.

How has your continued existence as living sculptures (the day-to-day actions) contributed to the creation of a graphic series like this?

George: These pictures probably more than any others we made, we lived. We had to go and steal that poster. Put it in our pocket, even if it was raining, even if it was snowing. We still had to rescue these posters everyday. And seeing the studio filled with piles of nightmarish subjects, and then making the work, all of the posters came all the way through us. We were thinking about these people, grownups, kids, pensioners, people who are mauled by dogs — it came through us in an extraordinary way.

Gilbert: But you know, the Living Sculpture, that’s very interesting, because when we discovered the whole idea that we were the actual artwork that has feeling, meaning, understanding, happiness, unhappiness, even now, we always say we are leaving something behind, on the wall. We cannot just be in the gallery non-stop. It’s our vision of the world, our love letters. So in the beginning we started to leave these big drawings behind. These big artworks based on subjects like young people, or drunkenness, or shit, it's like a kind of preacher talking about what he feels like being alive. That’s what we feel it means to be a living sculpture: Talking about what you feel like being alive.

Gilbert: And even here you have our spirit, the sense of where we live — it’s on every picture. The ghost of us behind the text.

George: Not every artist wants to do a picture of a sex beast, but we want to.

Gilbert: It is like writing a novel in some ways. You are the protagonist talking to you.

What are you working on next?

George: It’s a big secret. We know and we don’t know.

Gilbert: At the moment we are just trying to sell this show to the public.

George: Even when we’re not, we’re not ever not creating. It’s always there.

Gilbert: It’s the total idea. Invitations, installations, postcards, they’re all done by us. It’s not done by a group, we don’t have of assistants. We have one boy — one person helping us.

Did they ever collect any posters for you?

Gilbert: No, that would be art! All that has to do with art we are doing.

George: There was one exception. A person sent us a poster.

Was it meant as a suggestion for a piece?

George: It was strange, they just sent it. And we thought well we said we would never use one that somebody else chose, so we thought if that’s the rule we should have an exception. So we did put that one in as well.

Do you remember what it said, and which piece it ended up in?