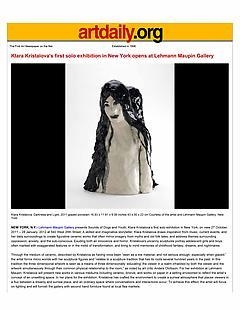 Through the medium of ceramic, described by Kristalova as having once been “seen as a low material, and not serious enough, especially when glazed,” the artist forms micro worlds with her sculptural figures and “relates to a sculpture tradition that has its roots several hundred years in the past. In this tradition the three dimensional artwork is seen as a means of three dimensionally ‘educating’ the viewer in a realm inhabited by both the viewer and the artwork simultaneously through their common physical relationship to the room,” as noted by art critic Anders Olofsson. For her exhibition at Lehmann Maupin, Kristalova will present new works in various mediums including ceramic, bronze, and works on paper in a setting envisioned to reflect the artist’s concept of an unsettling space. In her plans for the exhibition, Kristalova has crafted the environment to create a surreal atmosphere that places viewers in a flux between a dreamy and surreal place, and an ordinary space where conversations and interactions occur. To achieve this effect, the artist will focus on lighting and will furnish the gallery with second hand furniture found at local flea markets.