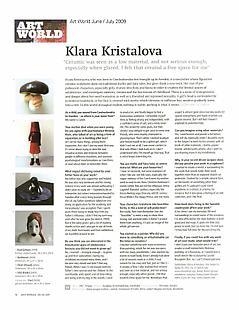 Klara Kristalova
"Cermaic was seen as a low material, and not serious enough, especially when glazed. I felt that created a free space for me"

KLARA KRISTALOVA who was born in Czechoslovakia but brought up in Sweden, is a storyteller whose figurative ceramic sculptures draw on traditional myths and fairy tales, but gives them a new twist. Her cast of pre-pubescent characters. especially girls, mutate into flora and fauna in order to explore the liminal spaces of adolescence, and investigate memory, trauma and the lost terrain of childhood. There is a sense of transgression and danger about her small scenarios, as well as a thwarted and repressed sexuality. A girl's head is surrounded by poisonous toadstools, or her face is covered with moths which threaten to suffocate her; another gradually turns into a tree. In this world of magical realism nothing is stable, nothing is what it seems.

As a chilcd you moved from Czechoslovakia to Sweden -so where is your name from?

My name is Czech.

Art can be many things, among them reparation, but I don't see my work that way. It's more about trying to describe and visualize actions and tensions between people in different situations, and common psychological transformations as I see them, or read about them or remember them.

What impact did being raised by your father have on your work?

My father was very supportive and helpful. He was also very dominant and his strong interest in my work was almost suffocating. I didn't plan to study art - I wanted to be an interpreter, but when I returned exhausted to Sweden after a very tiring journey through the US, my father somehow talked me into doing an application for the academy, and miraculously I was accepted. Then I spent years there trying to break free from my father's influence. I didn't find my own way untiI after he was gone [he died in 1999]. But in the early years I got a lot of training: thanks to him and I also got to see all kinds of art, both from books and from exhibitions we travelled around to see.

Do you think you are interested in the transitional space of adolescence because you did not want to grow up?

No, I wanted - strangely enough - to grow up and fit in somewhere. During my childhood we moved many times, and I became very closed and didn't find any friends. When I was 12 we moved with my father's new woman and her children to the countryside, and I spent a lot of time riding and being with my dog in the woods. I used to read a lot and finally began to find a harmonious existence. I remember myself then as feeling strong and independent, with a confident sense of self, and a lively inner life. This lasted for some years, but then slowly I was obliged to get used to some new friends, who were mainly interested in pleasing boys. That's when I started to adjust and forced myself to be a girlish girl, which didn't suit me at all. I was never content in that role. When I look back on it, I don't understand why I let myself go that way. That is what keeps interesting me.

You use myths and fairy tales as source material. What are your favourites?

I have no favourite, but some examples of what I like are: old folk tales, especiaIly the vague memory of the Czech ones my mother used to read to me; Hans Christian Andersen's stories (when they are not too religious); Selma Lagerlof (Swedish author), especially the Gosta Berling saga; Dracula; old DC comics; Oscar Wilde's The Happy Prince; and lots more.

Your characters transform into beastlike forms. Is this a kind of self-protection?

Not really. Their transformation into the "beastlike" is more a way to show their strong, sad and bad sides, it doesn't protect them from anything, it's just an image of the whole girl-person.

You started as a painter. Why did you move to something so unfashionable (at the time) as ceramics?

I needed something with more restrictions than painting, which for me was too open, with too many possibilities, I also wanted my stories to have body. Since I already had done a lot of ceramic work as a child, it was natural for me, easy and fast, just as I like it - it creates a flow. I also realised that ceramic was seen as a low material, and not serious enough, especially when glazed. I felt that created a free space for me. Nowadays that aspect is almost gone since low-key works fill spaces everywhere, and loads of artists use glazed ceramic. But I still feel I haven't explored its potential fully.

Can you imagine using other materials?

Yes. I used bronze and plaster a lot before, and still do, especially when I do public work. In the future I'm keen to mix ceramic with all kinds of other materials - textile, papier-mache, welded parts, plastic; also I want to use drawing more in my installations.

Why, in your recent Alison Jacques show, did you present your work in a cupboard?

I wanted to create a world, a surrounding for the work that would make them work together more than as separate objects on pedestals. I looked for a simple, natural form, on the border of something other than gallery art. A cupboard could stand anywhere, in a school, in a home, for instance. But it also gives a feeling of an odd collection, and I like that.

How much does living in the Swedish countryside affect your work?

A lot, since I use my everyday Iife and surroundings to create some of the scenarios. I'm also affected by the slow dullness in both good and bad ways. It gives me time and peace to work, but can bore me. I'm not sure I'll live here full time for the rest of my life.

Finally, if you could live with any work of art ever made, what would it be?

I don't have one favourite piece of art, but maybe a small melancholic Watteau painting, or a Rousseau, or I would love a small sketch-like sculpture by Louise Bourgeois, But, no, I can't choose just one.