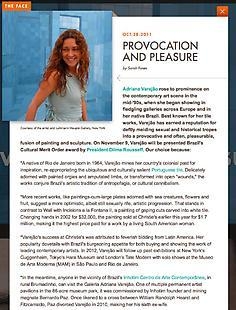 Provocation and Pleasure
By Sarah Fones

AdrIana Varejão rose to prominence on the contemporary art scene in the mid -'90s, when she began showing in fledgling galleries across Europe and in her native Brazil. Best known for her tile works, Varejão has earned a reputation for deftly melding sexual and historical tropes into a provocative and often, pleasurable, fusion of painting and sculpture. On November 9, Varejão will be presented Brazil's Cultural Merit Order award by President Dilma Rousseff. Our choice because:

*More recent works, like paintings-cum-large plates adorned with sea creatures, flowers and fruit, suggest a more optimistic, albeit still sexually rife, artistic progression. That stands in contrast to Wall with Incisions a Ia Fontana II, a painting of gaping cuts carved Into white tile. Changing hands in 2002 for $32,000, the painting sold at Christie's earlier this year for $1.7 million, making it the highest price paid for a work by a living South American woman.

*Varejão's Success at Christie's was attribute to feverish bidding from Latin America. Her popularity dovetails with Brazil's burgeoning appetite for both buying and showing the work of leading contemporary artists. In 2012, Varejão will follow up past exhibitions at New York's Guggenheim, Tokyo's Hara Museum and London's Tate Modern with solo shows at the Museo de Arte Moderna (MAM) in São Paulo and Rio de Janeiro.

*In the meantime, anyone In the vicinity of Brazil's Inhotlm Centro de Arte Contemporãnea, in rural Brumadinho, can visit the Galeria Adriana Varejão. One of multiple permanent artist pavilions in the 86-acre museum park, It was commissioned by Inhotim founder and mining magnate Bernardo Paz. Once Iikened to a cross between William Randolph Hearst and Fitzcarraldo, Paz divorced Varejão in 2010, making her his slxth ex-wife.