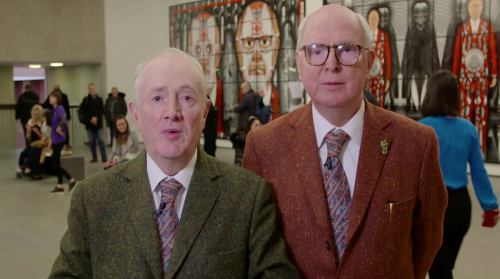 With more than 7500 visitors to their exhibition at the MAC over the past few weeks, Gilbert & George have been taking in the sights of Belfast.

The world-renowned artists opened Scapegoating Pictures at the venue in January and have been speaking about their love for the city.

George said: “We like very much to show here because it is not London, Paris or New York, it’s not a blasé city, art here, needs to be about meaning more than with the market, fame or fortune.

"People wonder what the hell is it, what the hell should I think, and that’s very good for us. We have something to say to this place.”

The exhibition is showing across all three galleries in the MAC. It is the first time they have exhibited in Northern Ireland in almost 20 years.

Gilbert and George will be back in Belfast for a public signing at the MAC and a special event at the Merchant Hotel on April 11.

Áine McVerry, acting CEO of the MAC, said: “Anyone who knows the work of Gilbert & George knows how it is both provocative and evocative, and the feedback from the thousands of people who have already visited Scapegoating Pictures certainly reflects this.

“Previous exhibitions from Andy Warhol and David Hockney have demonstrated how exhibitions of this calibre attract not only local visitors but significant numbers from out of state, boosting the MAC and Belfast reputation as a destination for world class art.

"We are already looking forward to their return in April.”

The exhibition runs until April 22.