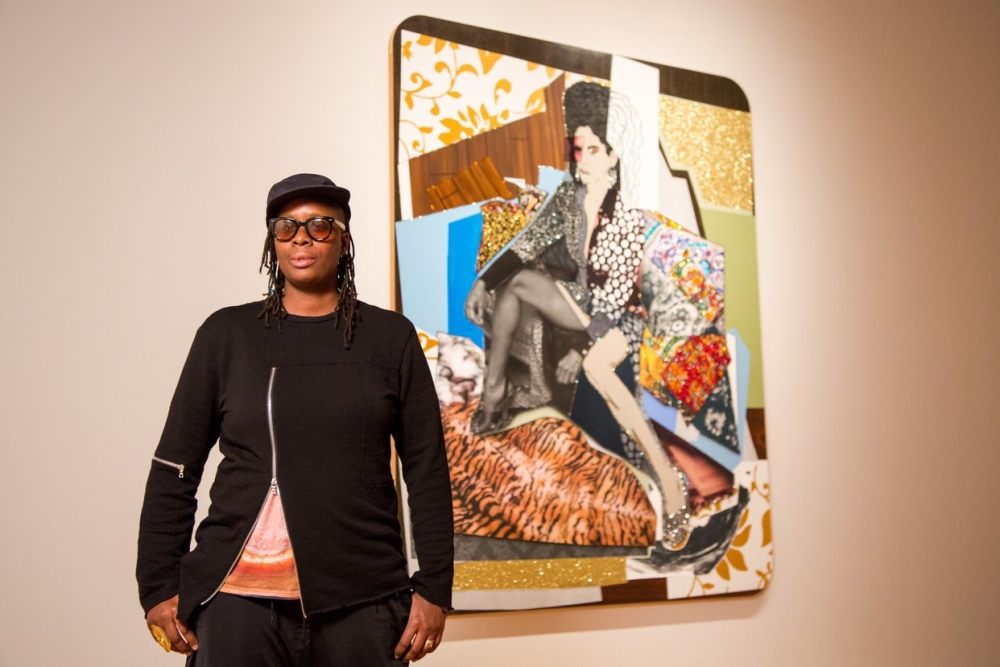 A powerful, important exhibition that really must be experienced in person: SAM brings together paintings by Robert Colescott, Kerry James Marshall and Mickalene Thomas, three artists who re-imagine a Western painting tradition that largely shut out people of color.
By Gayle Clemans

The huge paintings in the new exhibition at the Seattle Art Museum are filled with thick brush strokes, masterful compositions, and liberal doses of glitter and sequins. They are also pointedly and vividly filled with representations of black people, histories, and experiences.

Art — especially traditional painting — has been used by dominant cultures and elite individuals to promote themselves, to perpetuate power structures, and to propel certain histories forward. In the exhibition “Figuring History: Robert Colescott, Kerry James Marshall, Mickalene Thomas,” three artists have used painting to resist elitism, reveal power structures, and remind us of which histories — and which people — are represented and which are not.

Their work is brought together for the first time in a powerful, important exhibition that really must be experienced in person to get the full impact of these enormous, vibrant works. Thomas’ mixed-media work “Le déjeuner sur l’herbe: Les trois femmes noires,” for example, is 24 feet across and serves as the grand finale of the exhibition. But more on that later.

The show rightly begins with Robert Colescott, who passed away in 2009 at the age of 83. During our conversation before the exhibition preview, Marshall and Thomas spoke of the older artist as a significant figure for each of them and how exciting it was to see their work grouped together. “There’s a level of sheer power and beauty that seems to extend all the way through,” Marshall said. “That’s satisfying for us and it’s encouraging for generations of artists to come. This says, ‘There’s space for you, too.’ ”

Colescott, who, after serving in World War II, was dissuaded from studying international relations because of his race, turned to art, which he injected with fierce and funny allusions to injustice, sex, and history.

His most well-known painting, “George Washington Carver Crossing the Delaware: Page From an American History Textbook,” welcomes — or confronts — visitors at the very start of the exhibition. In 1975, Colescott created this version of the 19th century “Washington Crossing the Delaware” (by the German artist Emanuel Leutze) by repopulating the famously idealized image with less than ideal depictions of black figures. They are caricatures, in fact, the stereotypes of the mammy, drunk, minstrel and others. At the boat’s helm stands George Washington Carver, the scientist known for his uses of the peanut, and one of the few African Americans mentioned by name in primary-school history books. In a single, biting image, Colescott simultaneously points out the lack of historical representation of people of color and the pervasive negative imagery of people of color.

After two galleries of Colescott’s jabbing, jeering paintings with their swirling paint and riotous color, Marshall’s work seems a little quieter, with more open settings and subdued color palettes. In one series, the black and gray tones — and subtle symbols of black subjugation and resistance — ground the delicious subject matter: a couple in the full swing of romance.

In another series, “Souvenir,” the somber palette befits the content — the commemoration of black lives lost. Glittering gold and silver enliven the surfaces and conjure up ideas of heavenly realms and kitschy keepsakes. Through painted portraits and scrolling names, Marshall records important black figures, including, among many others, Zora Neale Hurston, W.E.B. Du Bois, Otis Redding, Malcom X, and, in one angelic grouping, Denise McNair, Addie Mae Collins, Carole Robertson and Cynthia Wesley, the four girls killed in the 1963 Birmingham church bombing.

Marshall has said, “You can’t be born in Birmingham, Alabama, in 1955 and grow up in South Central [Los Angeles] near the Black Panthers headquarters, and not feel like you’ve got some kind of social responsibility. You can’t move to Watts in 1963 and not speak about it.”

According to SAM curator Catharina Manchanda, who organized this exhibition, Marshall feels compelled to include depictions of ordinary people and moments as well as larger narratives about history, heroism, and tragedy.

A semi-ordinary scene and a full-on return to bold coloration play out in Marshall’s well-known “School of Beauty, School of Culture.” The panoramic painting reveals a complex beauty-salon scene with primping customers, busy stylists and tiny children, all rendered in Marshall’s trademark, very black skin tones.

There are also multiple references to art history. In the foreground, the disembodied head of Disney’s Sleeping Beauty hovers like a specter, a nod to a 16th-century painting by Hans Holbein which also explored the negotiating power of symbolic objects and personal appearance. In Marshall’s work, Sleeping Beauty’s white face and flowing blonde hair are surreal and out of place, a source of bemusement for a couple of toddlers.

Thomas, too, explores ideas of beauty and representation. The youngest of the three artists in the exhibition, Thomas is likewise an established voice in the contemporary-art world. A child of the 1970s, her paintings are imbued with a groovy vibe and often inhabited by captivating, Afro-wearing women who gaze out of the images, directly redressing the Western tradition of white men painting white women as passive objects.

As part of her process, Thomas stages patterned and textured interiors that her sitters occupy, then she photographs them. You can see these large, saturated photographs elsewhere, in other venues. But this is an exhibition about painting and the way these three artists reference and critique and expand its traditions and conventions.

So, working from the photographs, Thomas deconstructs and reconstructs the images, creating extraordinarily intricate compositions with engaging tensions between realism and abstraction, depth and surface, and the viewer and the viewed.

A brilliant sensuality also infuses her work, due to the exchanged looks; self-possessed bodies; and varied colors, patterns and textures, all of which are enhanced by myriad sequins that cling to the surfaces of these paintings. These are truly dazzling works of art.

“Le déjeuner sur l’herbe: Les trois femmes noires” (“Luncheon on the grass: The three black women”), is Thomas’ take on the famous 19th-century painting by Édouard Manet, which itself was a take on a 16th-century painting by Titian. In Thomas’ work, women take the field, seemingly pleased to be sitting together and staring at us as if we are not at all needed to complete them. Jagged lines, in fact, crackle across the huge panels, suggesting a breakdown of art’s traditional role as an unquestioned mirror of our world or a window into another.

In front of this monumental work is a sitting area, designed by Thomas, with patterned ottomans, potted plants, and stacks of books that have inspired the artist. We are invited to lounge, to learn, to figure out and be figured into the art.

Both Marshall and Thomas believe that museums — and art — can be transformative. “Each person is going to take something different from the work,” Thomas said. “And that’s all you hope … that the work does something. So when they leave here they take it with them.”