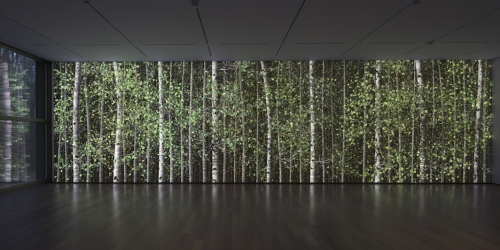 The Los Angeles-based artist Jennifer Steinkamp’s Blind Eye, 1, 2018, a roughly three-minute-long animated loop, depicts a life-size grove of birch trees cycling through the seasons, their ocular scars delivering an uncanny, plural gaze. The video is included in a survey of the artist’s work at the Clark Art Institute in Williamstown, Massachusetts, titled “Blind Eye,” which comprises the first video installations shown at the museum and is on view through October 8, 2018. Here, Steinkamp talks about inspirations for “Blind Eye,” the limitations of vision, and learning to decide.

THERE’S A FEELING YOU GET when you walk out of a movie and the world feels different: that’s what I’m after. When I was invited to make a project for the Clark’s Tadao Ando-designed building, I visited the museum and noticed it was surrounded by birch trees. I’ve always admired birches, so I researched their cultural implications. I began looking at the birch paintings of Gustav Klimt, someone I share a lot of interests with. He pays attention to the details of the bark and does a lot better than many painters of the time, who would just mark a couple of verticals down and call it a birch. And one of Vincent van Gogh’s last paintings depicts a beautiful forest, though its representation varies a lot if you look it up online. I was drawn to the trees’ flexibility, their bendiness, and how they’re used for so many things. Then I noticed the knots in the wood, which can look like mysterious eyes; this is the shape that is made when the branches fall off. As I created Blind Eye, 1, I wanted the “eyes” not to look too much like eyes but to give the impression of them. I became interested in playing with the limitations of vision, specifically with monocular vision, and how this affects perspective. As I was working on the piece, my brother actually temporarily lost his sight, but my life is full of coincidences like this.

I knocked out the horizon line in the video to create a different sense of depth. Because if you were walking around in the Clark’s space and saw a ground plane receding, you would feel like you were looking at an image—something I wanted to avoid. The challenge was to represent perspective without the horizon line—through layering and speed and value and scale. It seemed like the large wall was ideal for a panorama, so I made three projections that run in sync. Instead of crafting something ultrarealistic or obviously simulated, I wanted to achieve an in-between state.

My software, Maya, lets you make things that branch out: veins, hands, trees, flowers. You tell it how many branches and take your texture map, and it wraps around them, and the texture will be repeated as many times as you tell it to. You tell the branch how loose you want it: Do you want it to blow with the wind a bit? Do you want it to bend? I keyframed the branches to sometimes bend and twist, to attract to something. A challenge is getting the visuals to loop without the viewer noticing the repetition. People watch my work for a long time. Sometimes they’ll watch things on a ten-second loop for twenty minutes.

I don’t have a problem with beauty; it makes you consider how you feel about things. Intuition—fast decision-making—is very important for my artmaking. When an artist works, they’re constantly making quick decisions, and you learn to be intuitive. You learn to decide. Anything and everything is a representation, and the same thing goes for narrative. When I deal with narrative, I don’t have a beginning, a middle, or an end. It’s more of a continuation. Often, the beginning, middle, and end can be likened to birth, life, death. But I seem to always leave out the death part.