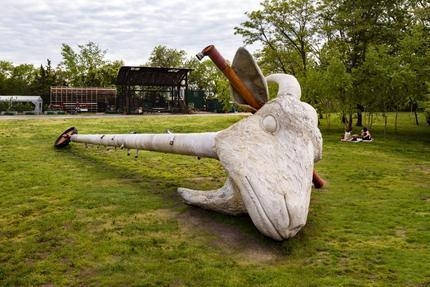 “I didn’t want to ignore the popular slogan ‘Make America Great Again,’” artist Nari Ward says of the title choice for his 2017 solo exhibit at Socrates Sculpture Park in Queens. “It’s the ridiculousness of that that I wanted to mirror, but in my own way.” Jamaican born and a Harlem local, Ward is deeply absorbed in the potential of art and language—in meaning layered on thick via choice materials, discarded objects, symbols—and a considered exercise of semantics. Ward’s word choice is important, if not integral to his practice. It’s the “poetry of meaning” that keeps him up at night, he says. The possibility of peeling back the surface to hint at our most urgent truths. “It’s the idea that those spaces on the margins can be brought to the forefront, or the questions on the margins can be brought into the light. That’s really important.”

So there is, of course, a great deal more to Ward’s installation in the five-acre park than a bent political catchphrase, embodying misplaced expectations. An acronym for ‘Greatest Of All Time,’ the show’s moniker, G.O.A.T., is also a reference to the eighth Def Jam Recordings studio album by rapper LL Cool J, which peaked at number one on the US Billboard 200 at its release in September 2000. It also references American sport and Muhammad Ali, and separately, a densely symbolic creature. “I really wanted to talk about power and about hubris, about a kind of misguided investment,” he says. “This goat character kind of became my doorway into it."

I spoke to Ward the day after the opening celebrations for the Socrates Park project, and two days after the launch of his fourth solo exhibition at Lehmann Maupin—a double show titled TILL, LIT. A mid-career survey is also on show at the Institute of Contemporary Art in Boston until 4 September, and a recent commission of his shoelace rendering of the first three words of the United States Constitution (‘WE THE PEOPLE’) is on view at the New-York Historical Society on the Upper West Side.

“I’m almost like, ok now I’m done!” he says of the year thus far. Ward garnered attention as early as 1993 for Amazing Grace, an installation of some 365 discarded prams, gathered from urban curbsides, arranged in an oval at an abandoned fire station in Harlem. Even here, Ward was conscious of the potential chemistry in material and language. “This was the early 90s, living in Harlem,” he says of the piece, which he chose to layer with lyric: Mahalia Jackson’s soaring rendition of Amazing Grace. “This is the era of crack and neglect in the neighbourhoods and community, and a lot of duress,” he says. His accent harbours an unmistakable Jamaican flush, tucked beneath otherwise near-native Harlem drawl. “I was trying to find objects that mirrored some of that, but also add dignity and critique to where that community was going.”

My first encounter with Ward’s community-based practice was a Vimeo clip documenting Sugar Hill Smiles, in which Ward took to the streets of Sugar Hill in Harlem, asking locals to peer into the insides of small tins, in which he had fixed mirrors. When they grinned, he’d seal the tin, attempting to capture their smile. The 2014 performative piece was coated in meaning and histories and symbols, though it spoke most specifically to the gentrification of Harlem, to the place being branded and marketed for the profit of outsiders with little direct investment in the neighbourhood. (Proceeds went to support Sugar Hill Project, an affordable housing unit.)

Though pinpointed to his home village and his own lived experience, it’s impossible to skip over the level of universality in Ward’s work, made real via his careful alchemy of language and allegory. Over the years, Ward’s practice has become “much more broadly about power and symbols of power,” he offers. “About how those symbols of power(s) can somehow be mediated to be humanised and to be considered in ways that wouldn’t normally be plausible.”

And as with the titles of his work, Ward is wary of labels—for himself and his practice. He handles political and art world monikers as invisible delicacies. “You know people think I’m a green artist,” he tells me. While he famously works with reappropriated found and discarded objects and items, it isn’t necessarily a part of an environmental mandate. Ward, who began his artist life as an illustrator, says discarded objects “resonated in the question-asking I really wanted to be doing, which wasn’t really happening on the two-dimensional plane.” So while observations of conservationism and consumerism might be inherent in the greater message of his oeuvre, his choice of material is more about compiling profundities. “I’m much more engaged with this notion of empathy and how to make that thing that one doesn’t care to look at or pay any attention to any more the most special thing, and something that really garners meaning.”

Ward, who recently won the US $100,000 Vilcek Prize, for immigrant artists, has been aligned with art activism too, though it isn’t altogether an accurate tag. “I’m careful because I have a lot more respect for the term activist,” he says. “I love artists who are being activists, but I’m also super critical of them because I know what does and doesn’t work. I’m excited about it, but also wondering about how it would work long term.” He highlights the artifice of art and wonders whether artistic effort would be weighty enough to procure real policy change. “That’s why I never feel comfortable [with the label]—there’s people who put their life in this. And I’m not putting my life in it.”

“I’m interested in that interface with materiality and alchemical dialogue, and the poetry of meaning,” he says. And joking, “I’m a lot more in the world of—what do you call it—you know, those magic realism folks!” Perhaps ‘alchemist’ is a more suitable label for Nari Ward, if he’d ever settle for a sole descriptor.

Alongside his practice, Ward is a professor of studio art at the City University of New York, where he undertook his own BA and MFA, and it’s here he believes he can have the greatest social impact. “For me, teaching is a form of activism. It affected me as a young artist, and I’m sure that I’m doing the same, or have the potential to do the same for another young person,” he says. “Whether it is somebody like myself, or even just a white male artist who for the first time will have a teacher or a mentor that is coming from another cultural background.”

“[Teaching] is a business and a power in a lot of ways, and I don’t take that lightly, I really respect it.” I sense this restless effort to compound denser meaning from the vehicle of art and language must permeate his classes too. “It’s the idea that the art quest is not about decoration— there is an element of aestheticising that’s inherent in it, sure—but it’s also about questions, asking questions, trying to direct searches for other individuals in spaces that they may not be so mainstream.”

For Ward, there’s a channel of meaning to be gently steered in exhibition environments. At Socrates, his loaded symbolic goat appeared in various sculptural iterations, peppered across the sprawling waterside park. Scapegoat is a 40-foot hobbyhorse with the head of a goat, toppled, impotent and tragic looking. Bipartition Bell is a giant goat scrotum rendered in hammered copper—reminiscent of the Liberty Bell. Inside the structure, tiny bells dispel the puffed exterior. “There’s this notion of a misplaced expectation, you know somebody saying they can do all of these things and create of all of this stuff, but in the end it’s very simple and basic, and maybe even a disappointing experience."

Elsewhere in the park, goats cast from lawn ornaments featured shafts of rebar, an idea conjured in memory of his own childhood. “In countries like Jamaica, they’ll leave the rebar sticking out of the top of their homes, so that the next generation can build on it. It’s a symbol of possibility.”

At Lehmann Maupin for TILL, LIT, a percentage of sales have been donated by the gallery upon Ward’s request to Housing Works, an organisation with the mission of ending AIDS and homelessness. The centrepiece for the show’s LIT element was a sculptural rendering of a temporary New York City Police Department tower, beaming an excruciating light. The TILL paintings use US currency as a material: Ward laser cut around 1/16th of an inch off the edges of dollar bills, just enough to ensure they still functioned, and placed them in overlaid patterns against his canvas. He later added empty cash tills as a centrepiece—their natural texture and shade often denoting the colour scheme of his canvas. He’d anoint the works with a mix of white rum and gold-or-silver paint, a ritual act and reference to his uncle who used the alcohol as a cure-all. It became a denotation of spirituality, the intersection of economic artifice with religious experience. In God We Trust. Ward later told ArtNet, “it started out with just trying to create these radiating edges—copper, gold, silver edges in the tills, too. And what ended up happening was just emptiness, a void.”

“I am one of these artists who is always very critical and dismissive of artists who have brought social and political content into the white cube. I’m like, man, take that shit out into the public where it can touch more lives. But both [spaces] have their possibilities. In my career, I’ve always felt that I can do the community stuff, and also do something in the white cube that can be just as critical and still be meaningful. I don’t think it’s either-or.”

For Ward, possibility and potential are central. They’re broadcast in gentle layers of meaning, in strict wordplay that reveals itself in shoelace spellings or flickering LEDs, post election, that spell the word POLL. “A lot of the ideas behind the public work and the studio work [are] about setting up a fertile visual space for the viewer’s own experience,” Ward says. “There’s a little bit of me nudging the conversation, but I don’t want to be the manual for understanding my work. It’s almost like when you see something from another culture. You know it’s meaningful, you don’t necessarily have all of the information—but you feel it. That’s what I’d like from a work of art. I don’t need a manual to tell me how to engage with it.”

This interview appears in the new issue of Museum, themed Factory. You can order a copy here. Nari Ward is represented by Lehmann Maupin, in New York.