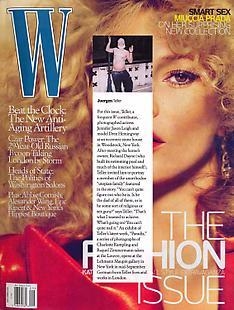 For this issue, Teller, a frequent W contributor, photographed actress Jennifer Jason Leigh and model Dree Hemingway at an eccentric stone house in Woodstock, New York. After meeting the home's owner, Richard Dayne (who built its swimming pool and much of the interior himself), Teller invited him to portray a member of the unorthodox "utopian family" featured in the story. "You can't quite figure out who he is. Is he the dad of all of them, or is he some sort of religious or sex guru?" says Teller. "That's what I wanted to achieve. What's going on? You can't quite nail it." An exhibit of Teller's latest work, "Paradis," a series of photographs of Charlotte Rampling and Raquel Zimmermann taken at the Louvre, opens at the Lehmann Maupin gallery in New York in mid-September. German-born Teller lives and works