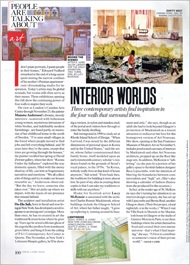 I don't paint portraits, I paint people in their homes," Edouard Vuillard remarked at the end of a long career spent mining the narrow confines of his mother's Parisian apartment-cum-dressmaking studio for inspiration. Today's artists may be global nomads, but rooms still often serve as their muses. Three exhibitions opening this fall show the continuing power of four walls to inspire their work. On view at London's Camden Arts Centre through November 25, the painter Mamma Andersson's dreamy, moody interiors-scattered with bohemian young women, mysterious intrusions of white birches, and indefinably modern furnishings-are based partly on memories orher childhood home in the north of Sweden. "I've seen small villages in the forest where people moved to find jobs and left everything behind, and 30 years later they're the same, except that trees arc growing through the houses," the painter recalled last spring at David Zwirner Gallery, where her show "Rooms Under the Influence" explored the way domestic spaces, filled with the messy disarray of life, can hint at fragmentary narratives and emotions. "We all collect alot of things and try to make our houses resemble us," Andersson observed. "But the day we leave, someone else takes over." Her art picks up where we depart, with the traces of our presence that remain behind. The sculptor and installation artist Do Ho Suh, born in Seoul and now living in New York, has developed a novel response to an immigrant's nostalgia: more than once, he has re-created in art the traditional Korean home where he grew up. Years ago he sewed a life-size ghost of the pagoda-like pavilion from translucent green fabric and hung it from the ceiling of P.S.l Contemporary Art Center in Queens. This November, at New York's Lehmann Maupin Gallery, he'll be showing a version, in nylon and stainless steel, of the portal arch visitors bow through to enter the family dwelling. Suh immigrated in 1990 to study art at Rhode Island School of Design. "When I arrived, I was struck by the different dimensions of personal space in Korea and in the United States," said the artist,whose father commissioned their family home, itself modeled upon an early-nineteenth-century scholar's residence found on the grounds of Seoul's royal palace, in the 1970s. "In Korea,nobody really lives in that kind of house anymore," Suh noted. "Even back then, the traditions for building it were almost lost. So part ofmy idea in creating these copies is that I can take my traditions or skills with me anywhere. "Home" for Scottish artist Lucy McKenzie is associated with the architect Charles Rennie Mackintosh, whose buildings include the Glasgow School of Art, where her father taught. "I grew up exploring it, running around its basement and attic," she says, though as an adult she had to look beyond Glasgow's promotion of Mackintosh as a tourist attraction to rediscover her love for this homegrown version of Art Nouveau. Her show, opening at the San Francisco Museum ofModemArt on November 9, includes jewel-toned canvases of interiors by Mackintosh and other Art Nouveau architects, propped up on the floor like stage sets. In addition, McKenzie is "subletting" (as she puts it) a portion of her gallery space to Scottish fashion designer Becca Lipscombe, with the intention of blurring the boundaries between commercialism and "high" art. (She's also showing a calendar of fashion illustrations she produced for the occasion.) In fact, at the tender age of 30, McKenzie says she's turning her attention to an interior-design company she has set up with Lipscombe and Bernie Reid, another Glasgow chum. (Their first project, a local nightclub. is in the works.) "When I visit the Villa Stuck in Munich or the Mackintosh house in Glasgow or the studio of Gustave Moreau in Paris, to see these buildings where the artists themselves lived and created their own intense universe-that's whal I find inspiring," she says. "I'd love to contribute to somone's vision of their private world." -LESLIE CAMHI