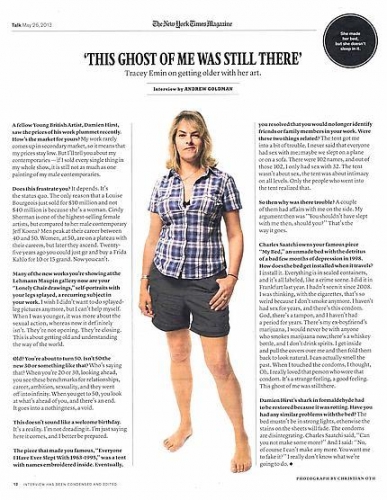 Tracey Emin on Getting Older With Her Art
By Andrew Goldman


A fellow Young British Artist, Damien Hirst, saw the prices of his work plummet recently. How’s the market for yours?

My work rarely comes up in secondary market, so it means that my prices stay low. But I’ll tell you about my contemporaries — if I sold every single thing in my whole show, it is still not as much as one painting of my male contemporaries.


Does this frustrate you?

It depends. It’s the status quo. The only reason that a Louise Bourgeois just sold for $10 million and not $40 million is because she’s a woman. Cindy Sherman is one of the highest-selling female artists, but compared to her male contemporary Jeff Koons? Men peak at their career between 40 and 50. Women, at 50, are on a plateau with their careers, but later they ascend. Twenty-five years ago you could just go and buy a Frida Kahlo for 10 or 15 grand. Now you can’t.


Many of the new works you’re showing at the Lehmann Maupin gallery now are your “Lonely Chair drawings,” self-portraits with your legs splayed, a recurring subject in your work.

I wish I didn’t want to do splayed-leg pictures anymore, but I can’t help myself. When I was younger, it was more about the sexual action, whereas now it definitely isn’t. They’re not opening. They’re closing. This is about getting old and understanding the way of the world.

Who’s saying that? When you’re 20 or 30, looking ahead, you see these benchmarks for relationships, career, ambition, sexuality, and they went off into infinity. When you get to 50, you look at what’s ahead of you, and there’s an end. It goes into a nothingness, a void.

It’s a reality. I’m not dreading it. I’m just saying here it comes, and I better be prepared.

The piece that made you famous, “Everyone I Have Ever Slept With 1963-1995,” was a tent with names embroidered inside. Eventually, you resolved that you would no longer identify friends or family members in your work. Were these two things related?

The tent got me into a bit of trouble. I never said that everyone had sex with me; maybe we slept on a plane or on a sofa. There were 102 names, and out of those 102, I only had sex with 32. The tent wasn’t about sex, the tent was about intimacy on all levels. Only the people who went into the tent realized that.


So then why was there trouble?

A couple of them had affairs with me on the side. My argument then was “You shouldn’t have slept with me then, should you?” That’s the way it goes.


Charles Saatchi owns your famous piece “My Bed,” an unmade bed with the detritus of a bad few months of depression in 1998. How does the bed get installed when it travels?

I install it. Everything is in sealed containers, and it’s all labeled, like a crime scene. I did it in Frankfurt last year. I hadn’t seen it since 2008. I was thinking, with the cigarettes, that’s so weird because I don’t smoke anymore. I haven’t had sex for years, and there’s this condom. God, there’s a tampon, and I haven’t had a period for years. There’s my ex-boyfriend’s marijuana, I would never be with anyone who smokes marijuana now; there’s a whiskey bottle, and I don’t drink spirits. I get inside and pull the covers over me and then fold them back to look natural. I can actually smell the past. When I touched the condoms, I thought, Oh, I really loved that person who wore that condom. It’s a strange feeling, a good feeling. This ghost of me was still there.


Damien Hirst’s shark in formaldehyde had to be restored because it was rotting. Have you had any similar problems with the bed?

The bed mustn’t be in strong lights, otherwise the stains on the sheets will fade. The condoms are disintegrating. Charles Saatchi said, “Can you not make some more?” And I said: “No, of course I can’t make any more. You want me to fake it?” I really don’t know what we’re going to do.