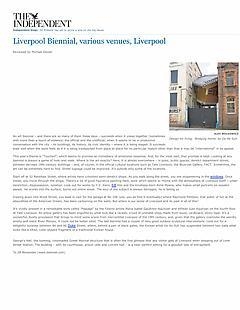 An art biennial – and there are so many of them these days – succeeds when it yokes together (sometimes with more than a touch of violence) the official and the unofficial; when it seems to be in productive conversation with the city – its buildings, its history, its civic identity – where it is being staged. It succeeds least well when the work feels as if it is being transported from place to place for no particular reason other than that it may be "international" in its appeal.

This year's theme is "Touched", which seems to promise an immediacy of emotional response. And, for the most part, that promise is kept. Looking at any biennial is always a game of hide-and-seek. Where is the art exactly? Here, it is almost everywhere – in pubs, public spaces, derelict department stores, between decrepit 19th-century buildings – and, of course, in the official cultural locations such as Tate Liverpool, the Bluecoat Gallery, FACT. Sometimes, the art can be extremely hard to find. Street signage could be improved. It's outside only some of the locations.

Start off at 52 Renshaw Street, where artists have colonised semi-derelict shops. As you walk along the street, you see sloganeering in the windows. Once inside, you move through the shops. There's a lot of good figurative painting here, work which seems to rhyme with the atmosphere of Liverpool itself – urban dereliction, dispossession, isolation. Look out for works by Y.Z. Kami, Edi Hila and the Kinshasa-born Aimé Mpane, who makes small portraits on wooden panels. He scores into the surface, burns out entire areas. The soul of the subject is always damaged, he is telling us.

Dipping down into Wood Street, you seek in vain for the garage at No 106 (yes, you do find it eventually) where Raymond Pettibon, that poker of fun at the absurdities of the American Dream, has been cartooning on the walls. But where is our sense of Liverpool and its past in all of this?

It's vividly present in a remarkable work called "Passage" by the Filipino artists Maria Isabel Gaudinez-Aquilizan and Alfredo Juan Aquilizan on the fourth floor at Tate Liverpool. An entire gallery has been engulfed by what look like a rackety crowd of unstable ships made from wood, cardboard, sticky tape. It's a wonderful, bustly procession that brings to mind some scene from mercantilist Liverpool of the 19th century, and, given that the gallery overlooks the weirdly empty and silent River Mersey, it could not be better sited. The last biennial had a couple of very good outdoor sculptural interventions. Look out for a delightful surprise between 84 and 86 Duke Street, where, behind a pair of black gates, the Korean artist Do Ho Suh has suspended between two walls what looks like a tilted, cube-shaped fragment of a traditional Korean house.

Another project that fruitfully engages with the city is a remarkable film in the Anglican Cathedral. Danica Dakic's "Grand Organ" was filmed entirely inside St George's Hall, the looming, colonnaded Greek-Revival structure that is often the first glimpse that any visitor gets of Liverpool when stepping out of Lime Street Station. The building – with its courthouse, prison cells and concert hall – is a near-perfect setting for a ghoulish tale of entrapment.