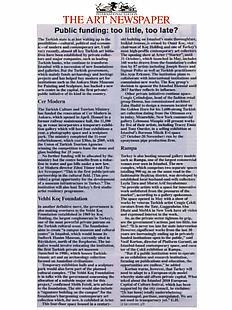 Public Funding: too little too late?

The Turkish state is at last waking up to the possibilities-cultural, political and economic-of modern and contemporary art. Until very recently, almost all key Turkish art initiatives have been established by private collectors and major companies, such as leading Turkish banks, who continue to transform Istanbul with a succession of new foundations and galleries. But the Turkish government, which mainly funds archeology and heritage projects and has helped buy modern art for institutions such as the Ankara State Museum for Paint and Sculpture has backed a new arts center in the capital, the first private/public initiative of its kind in the country.

The Turkish Culture and Tourism Ministry has funded the renovation of Cer Modern in Ankara, which opened in April. Housed in a former railway maintenance hall, the 11,500 sq. m venue incorporates a temporary exhibition gallery wich will host four exhibitions a year, a photography space and a sculpture park. The ministry completed the 11-year refurbishment, which cost $30m, in 2009, which the Union of Turkish Tourism Agencies winning the competition to lease the stone and glass building for 25 years.

No further funding will be allocated by the ministry but the centre benefits from a reduction in water and gas bills under a new law, Cer Modern director Zihni Tilmer told The Art Newspaper: “This is the first public/private partnership in the cultural field. (This provides) a great opportunity for the development of a museum infrastructure in Turkey.” The institution will also host Trukey’s first studio artist residency programme.

In another definitive move, the government is also making overtures to the Vehbi Koç Foundation (established in 1969 by Koç Holdings, the largest conglomerate in Turkey), one of the most powerful private patrons on the Turkish cultural scene. The foundation aims to create “a campus museum and cultural centre” in Istanbul, which would house its Sadler Hanim Museum, currently sited in Buyudere, north of Bosphorus. The initiative would involve relocating the institution, the first Turkish private art museum (launched in 1988), which houses Turkish-Islamic art and an archeology collection focused on Anatolian civilizations.

Temporary exhibition halls and a sculpture park would also form part of the planned cultural complex. “The Vehbi Koç Foundation is in talks with the government concerning the allocation of suitable major site for this project,” confirmed Melih Fereli, arts advisor to the foundation. The site would also include a “signature building on the campus” for the foundation’s burgeoning contemporary art collection which, for now, is exhibited at Arter.

This four-floor space housed in a century-old building on Istanbul’s main thoroughfare, Istiklal Avenue, is owned by Omar Koç, vice chairman of Koç Holding and one of Turkey’s most high-profile contemporary art collectors. The opening show at Arter (“Starter”, until 31 October), which launched in May, includes 160 works drawn from the foundation’s collection by 87 artists including Joseph Beuys and Sigmar Polke as well as Turkish practitioners like Ayse Erkmen. The institution plans to collaborate with international institutions and commission new works. The Koç group’s decision to sponsor the Istanbul Biennial until 2017 further reflects its influence.

Turkey is also hosting unusual gallery models such s Rampa, one of the largest commercial venues ever seen in Istanbul. The new complex, which comprises two separate spaces totaling 990 sq. m on the same road in the fashionable Besiktaj district, was developed by established local husband-and-wife collectors Leyla Tara and Murat Arif Suyagatmaz “to provide artists with a space for innovative work unfettered from the pressures of the market”, according to a gallery spokesman, The space opened in May with a show of works by veteran Turkish artist Cegiz Çekil; curators from the Tate, Guggenheim Abu Dhabi and MoMA in New York have all visited and expressed interest in the work.

So as the private sector tightens its grip, are the government’s actions just too little, too late? “It is never too late for state intervention. However, significant works from the last 30 years are increasingly ending up in privately funded institutions open to the public,” said Vasif Kortun, director of Platform Garanti, and Istanbul-based contemporary space, and curator of Çekil exhibition at Rampa.

“But if a public institution were to operate as an exhibition and research institution, focusing on publication and education, the opportunities are endless,” he added.

Kortun warns, however, that Turkey will need to adapt to a European-style model whereby state-aid offsets private capital. When asked about the Istanbul 2010 European Capital of Culture festival, which has been supported by the city council, he exclaims: “(It has been) totally underwhelming: mismanaged, partisan, unregulated, We are not used to transparency yet.