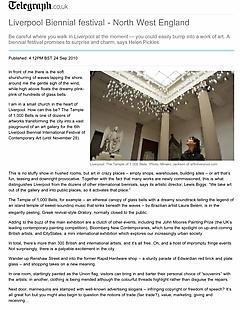 In front of me there is the soft shurshurring of waves lapping the shore, around me the gentle sigh of the wind, while high above floats the dreamy plink-plink of hundreds of glass bells.

I am in a small church in the heart of Liverpool. How can this be? The Temple of 1,000 Bells is one of dozens of artworks transforming the city into a vast playground of an art gallery for the 6th Liverpool Biennial International Festival of Contemporary Art (until November 28).

This is no stuffy show in hushed rooms, but art in crazy places – empty shops, warehouses, building sites – or art that’s fun, teasing and downright provocative. Together with the fact that many works are newly commissioned, this is what distinguishes Liverpool from the dozens of other international biennials, says its artistic director, Lewis Biggs: “We take art out of the gallery and into public places, so it activates that place.”

The Temple of 1,000 Bells, for example – an ethereal canopy of glass bells with a dreamy soundtrack telling the legend of an island temple of sweet-sounding music that sinks beneath the waves – by Brazilian artist Laura Belém, is in the elegantly peeling, Greek revival-style Oratory, normally closed to the public.

Adding to the buzz of the main exhibition are a clutch of other events, including the John Moores Painting Prize (the UK’s leading contemporary painting competition), Bloomberg New Contemporaries, which turns the spotlight on up-and-coming British artists, and CityStates, a mini international exhibition which explores our increasingly urban society.

In total, there’s more than 300 British and international artists, and it’s all free. Oh, and a host of impromptu fringe events. Not surprisingly, there is a palpable excitement in the city.

Wander up Renshaw Street and into the former Rapid Hardware shop – a sturdy parade of Edwardian red brick and plate glass – and shopping takes on a new meaning.

In one room, startlingly painted as the Union flag, visitors can bring in and barter their personal choice of “souvenirs” with the artists; in another, clothing is being mended although the colourful threads highlight rather than disguise the repairs.

Next door, mannequins are stamped with well-known advertising slogans – infringing copyright or freedom of speech? It’s all great fun but you might also begin to question the notions of trade (fair trade?), value, marketing, giving and receiving…

The theme of the international exhibition is “Touched”, but don’t get too hung up on its correct interpretation; essentially, it’s about how art should touch the viewer to provoke emotions (positive and negative). “Unless there’s an emotional hook,” says Biggs, “people won’t look at art. Good art should touch people, not just be about good marketing.”

Indeed, at Rapid the lines between art and viewer become distinctly blurred. Indian artist NS Harsha has covered the floor with a sea of painted faces. Stand in the middle and glance up at the mirrored ceiling and you’re placed, literally, in the picture.

Unusually, for an art exhibition, some pieces positively encourage “look and touch”. At the Bluecoat, explore a maze of brightly coloured ribbons that conceal two hidden figures at the centre. (Are you revealing or discovering?) Or wander around a replica of Liverpool FC’s dressing room (surprisingly austere for such a wealthy club).

At FACT (Foundation for Art and Creative Technology), the UK’s leading centre of new media arts, navigate a surreal, dream-like world of three-legged tables and half-chairs; while at Tate Liverpool you’re invited to sit on or crawl around a bright blue, intestinal-shaped sculpture, thus subtly changing the piece of work from the observer’s point of view.

The Tate, on the restored 19th-century Albert Dock, has the largest group of works in the Touched exhibition, after the Rapid store. Some of the work is breathtaking – Polish Magdalena Abakanowicz’s huge pile of oversized sacks and pebbles, like detritus on a seashore – while some of it is frankly baffling; American artist Jamie Isenstein “inhabits” her installation (keep an eye on the fire hose).

Touched is also about how art can touch a place. Italian Rosa Barba has brought the underground world of Liverpool to the surface by recording the unheard rumbles of the Mersey tunnels’ ventilation shafts and “spilling” them into the daylight alongside a sculptural pipework that rises from the pavement and through first-floor windows.

Half the fun is stumbling across an artwork where you least expect it. A shoal of 170 manta rays, for example, “swims” across the atrium of one of the glassy-new buildings down by the Pier Head. Perhaps a comment on the displacement of old buildings by the bold and new? Step into the former Congregational Chapel on Great George Street and you’ll find not a cross, but a vast sword hanging from the ceiling, its tip poised above your head.

Equally intriguing, although more discomfiting, is discovering that something isn’t what it appears. The parade of international flags hanging on the neo-classical façade of the defunct Scandinavian hotel (named because it was where Scandinavian sailors stayed when in port) looks like it should be fronting a pompous hotel. Look closer and you discover the flags are imprinted with photographs of burning flags taken from real-life protests.

Not far away, you’ll do a double-take. Is that a little house in a gap? Or a gap filled with a little house? And why does it fit in but not fit in? American-Korean artist Do-Ho Suh has created a traditional, wooden Korean house that appears to be neatly wedged in a narrow gap between two empty buildings, as though parachuted there.

This area, loosely bounded by Duke Street, Renshaw Street and Hanover Street – the city’s original ropemaking district – buzzes with creativity. As well as the home of contemporary arts venues the Bluecoat, Open Eye and FACT, artists live and work here.

Quirky shops make a refreshing change from highstreet chains and there’s a fine choice of bars and eateries here. Retro-style Café Tabac in Bold Street is a good-value lunch stop; Duke Street’s The Munro is a handsome gastropub; while the laid-back Parr Street Studios – a lounge-bar-restaurant-events space and recording studios – have hosted musicians from Simply Red to Doves.

Ah, music. Never far away when you’re in Liverpool, the birthplace of Sixties pop culture. When you’re down at Tate, make time for the nearby Beatles Story exhibition, a nostalgic ride through the Fab Four’s glorious and turbulent times, including the Cavern, Beatlemania and the psychedelic world of Sergeant Pepper.

At the attraction’s second site, in the new Mersey Ferries terminal, catch the White Feather exhibition – extended until the end of the year – Cynthia and Julian Lennon’s very personal account of life with John.

There’s a clutch of museums on the city’s waterfront, a World Heritage Site and the setting for the futuristic-looking £72million Museum of Liverpool, which opens next year. But if you’ve time for only one more, make it Merseyside Maritime Museum. The current exhibition on Sir Ernest Shackleton’s ill-fated 1914 expedition to Antarctica, with photographs and film footage of the party’s desperate attempts to free their ice-bound ship, Endurance, had me shivering.

Liverpool does that to you. It gets under your skin in ways you least expect and the biennial adds to the frisson. So what’s the best way to experience this arts show? Spend time in the cafés and bars and listen to the buzz. People will be commenting and criticising – this is a city not known to be shy about giving its views – then go and see for yourself. Me? I’m off back to the Oratory, to see if I can find that mythical temple beneath the waves…