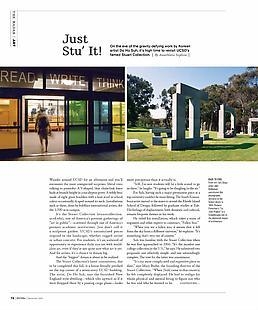 Wander around UCSD for an afternoon and you’ll encounter the most unexpected surprises. Metal trees talking to passersby. A V-shaped, blue chain-link fence built at branch-height in a eucalyptus grove. A teddy bear made of eight giant boulders with a knit scarf in school colors occasionally draped around its neck. Installations such as these, done by boldface international artists, dot the 1,200-acre campus.

It’s the Stuart Collection (stuartcollection.ucsd.edu), one of America’s premier gatherings of “art in public”—scattered through one of America’s premier academic institutions. Just don’t call it a sculpture garden. UCSD’s uncontained pieces respond to the landscape, whether rugged ravine or urban concrete. For students, it’s an unheard-of opportunity to experience daily run-ins with world-class art, even if they’re not quite sure what art is yet. And for artists, it’s a chance to dream big.

And the “biggest” dream is about to be realized.

The Stuart Collection’s latest commission, due to be completed this fall, is a house literally perched on top corner of a seven-story UCSD building. The artist, Do Ho Suh, says the furnished New England-style dwelling—which tilts upward as if it were dropped there by a passing cargo plane—looks more precipitous than it actually is.

“Still, I’m sure students will be a little scared to go in there,” he laughs. “It’s going to be dangling in the air.”

For Suh, having such a major permanent piece at a top university couldn’t be more fitting. The South Korean-born artist moved to the states to attend the Rhode Island School of Design, followed by graduate studies at Yale. His feelings of displacement, both domestic and cultural, remain frequent themes in his work.

He titled his installation, which takes a team of engineers and other experts to construct, “Fallen Star.”

“When you see a fallen star it means that it fell from the sky from a different universe,” he explains. “It’s something that’s very out of context.”

Suh was familiar with the Stuart Collection when he was first approached in 2006. “It’s the number one college collection in the U.S.,” he says. He submitted two proposals: one relatively simple, and one astoundingly complex. The vote for the latter was unanimous.

“It’s our most complicated and expensive piece to date,” says Mary Beebe, the founding director of the Stuart Collection. “When [Suh] came to the country, he felt completely displaced. He had to realign his whole physical and mental being to figure out who he was and who he wanted to be. “Students at UCSD have left their homes for the first time. Many have been through other kinds of displacement as well. Suh’s work seemed really appropriate for a college campus.”

Beebe herself was lured to La Jolla in 1981 from Portland, where she’d run a contemporary “on-a-shoestring” space that hosted the likes of musician Phillip Glass and artist Bruce Naumann. Naumann’s “Vices and Virtues” –7-foot neon letters proclaiming “LUST,” “HOPE,” “SLOTH” and other symptoms of humanity on the side of a campus building—is a Stuart Collection standout and UCSD landmark.

Philanthropist and art lover James Stuart DiSilva had given his eponymous collection a generous initial budget. Everything else was up to its new director. “There was no room for failure,” Beebe explains, “Stuart didn’t believe in endowment funds. He said if we were doing a good job, we’d be able to raise money.”

Beebe and the advisory board—comprised of global art experts like the Getty’s director emeritus John Walsh and MCASD director Hugh Davies—decided against a traditional sculpture garden. “We thought spreading things around would make it like a treasure hunt,” Beebe says. “You come upon these works when you’re not in a museum state of mind, which changes the way you respond to them.”

Niki de Saint Phalle’s “Sun God,” a colorful deity that sits atop a 15-foot arch, was the inaugural installation in 1983. Beebe recalls that the staff originally charged with turning de Saint Phalle’s scale model into a massive stature was skeptical at best. “They said it was a stupid idea and that the students would destroy it,” she sighs. Instead, the still-unscathed statue has become an iconic gathering place.

Though Beebe won’t choose a favorite, she does admit, “Coming across the Naumann at night is still heart-throbbing. But I love them all for different reasons. They hold up, which is really great.”

Beebe also refuses to describe the Stuart Collection as public art. “There are artists who train to be public artists and work with city entities and learn more how to be bureaucrats than artists,” she points out. “We want people who think in new and different ways. We’re art in public, not public art.”

She also has a pat response for the naysayers who ask: But how is this art? “It’s not about taste. It’s not about what you would put in your living room. We’re not decorating the campus. We’re trying to provide really thought-provoking experiences.”