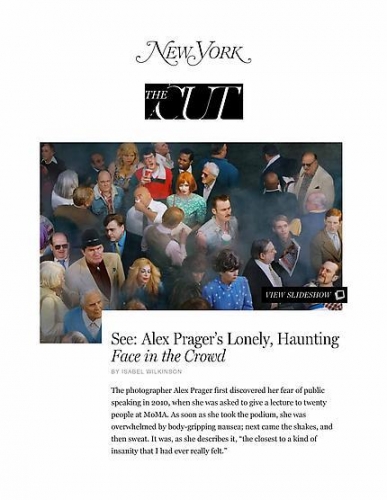 
The photographer Alex Prager first discovered her fear of public speaking in 2010, when she was asked to give a lecture to twenty people at MoMA. As soon as she took the podium, she was overwhelmed by body-gripping nausea; next came the shakes, and then sweat. It was, as she describes it, “the closest to a kind of insanity that I had ever really felt.”


Strangely, her photographic work over the next three years – expertly crafted, large-scale pictures of crowds – has helped Prager slowly overcome that fear. In her crowd images, every extra has been hand-picked and outfitted in the artist’s signature style, with makeup, hair, and clothes styled in such a way as to simultaneously suggest hyper-reality and complete timelessness.


“By going in and picking out each extra and dressing each person and physically putting my hands on each person, sometimes drawing in the eyebrows on each person or fixing a wig,” Prager says,“I literally was able to confront each individual within the crowd.”


Now the artist, who has established a career making portraits of women in lonely, haunting environments — and who has shot numerous fashion campaigns and editorials, including for Bottega Veneta and W Magazine — unveils Face in the Crowd at the Corcoran Gallery in Washington, D.C., alongside a short film starring Elizabeth Banks. Early next year, some of the same images will appear in a show at Lehmann Maupin gallery in New York.


We spoke to Prager about how she addressed her fears, her intentionally lonely pictures, and her venture into filmmaking:


You’ve been doing faces in the crowd for a few years now, in addition to other kinds of portraits. Why did you decide to dedicate a show around the crowd pictures?


In a way, I felt like the portraits were something I had to learn how to do in order to do the crowds properly. I’ve always been attracted to pictures with interesting crowds in them, like Weegee’s beach scene. That was one of the first pictures I was blown away by, and the pictures are really about the individuals in the crowd. That’s why I called it Face in the Crowd. It’s not as much about the group as a whole as it is about each individual that makes up the crowd. I feel like I’ve been working on that since the beginning of my career as a photographer.


When I first picked up a camera I was doing street photography, and I was always focused on individuals out on the streets with interesting looks, and faces that told interesting stories. The first day on set — I had been collecting all these props and costumes and wigs since I started, for like ten years, and this was the first time that I was able to bring everything to the set and use all of it at once. It was like, without even realizing it, I felt like my whole career as an artist had been kind of building up to this moment: to be able to shoot crowds. Maybe I’m kind of being overly dramatic about it, but that’s what it feels like right now.


Some of your crowd pictures have an obvious female protagonist – a woman you connect with, who’s staring back at you. In others, it’s not so clear. Do you intend to have a central figure in every picture?


I do want there to be an initial focal point, but it doesn’t have to be controlled by me what that focal point is. Some people connect more with the muscle man in the front wearing the Speedo, and somebody might connect more with the woman in the back wearing the leopard-print bathing suit. I’m kind of setting up a scene that feels familiar to people, and feels nostalgic in a way. I hope that people find something in there to have a personal connection with, and then their eyes can move around and see more in the picture after that.


Your pictures seem literally timeless — they’re not completely modern, yet they’re not totally seventies or anything either. Do you have a time period in mind?


Exactly what you said is what I was intending, so that’s great to hear that that was accomplished in some way. I wanted it to feel like some time period, possibly in the past, but you couldn’t quite put your finger on it. I wanted it to feel nostalgic and timeless, but also not feel old-fashioned, like I was trying to stick you in a particular decade.


And how do you feel when you’re in the crowd, as opposed to speaking in front of the crowd?


I think it really depends on my mood: When I’m in a good mood or I’m feeling a little bit more inspired, I’ll see the crowd with curious eyes, and kind of wonder what each person is up to or what their story is, or make up stories about them. And if I’m traveling for fifteen hours and being pushed from terminal to terminal with 500 strangers and there are like customs people yelling at us and giving us stern looks, I’ll just see it as a sea of anonymous faces that are kind of in my way.


I think you can feel more lonely than you’ve ever felt in a crowd. Your emotions can become exaggerated.


I think if you’re home alone and you’re feeling sad about something, generally you’re instinct is to get distracted and go back to work and do something productive: maybe cook, or take a shower, because you have to take care of yourself. But I think when you’re feeling sad in a crowd it’s almost like these people are creating this other kind of space around you. It’s like a cushion for you to bubble up in your emotions and kind of dramatize things more because you know that no one will really notice you. It’s almost more lonely because you know that no one cares, and you can just get lost in that.


Those are the feelings I have when I look at your pictures. They’re super lonely feeling.


Oh, good! Some people are looking at these pictures as cheerful, and I’m like, "I think you might have missed something if you’re seeing them as cheerful images."


Tell me about the film.


The film was shot at the same time as the stills. It’s the most cohesive work that I’ve done, I think, as far as the film and the photographs, because they were shot together and they were intended to be shown together. I have Elizabeth Banks. I chose her because I thought she would be a really good, All-American, working-class girl that looks really beautiful but also isn’t intimidating and feels familiar. And she could lead us through the crowd. I wanted her to be sort of curious about the crowd at first through the privacy of her room, and she’s looking out the window, and she wants to be a part of the crowd, and she’s curious about these people. And then she goes out into the crowd — and before too long the crowd becomes overwhelming. She kind of has a bit of a overwhelming panic experience where she becomes frantic, and the crowd kind of eats her alive.


I also use my sister in all the pictures as a kind of Where’s Waldo? because we are so connected — I’ve lived with her for almost ten years. She’s in every single crowd picture as a different character.


It was important to have her in the pictures because the extras are people that I don’t know at all personally. The pictures are meant to feel kind of empty, slightly staged, you’re not sure if this is real or fake. So having the fake staged extras all made-up in costumes and stuff and then having the real connection with my sister who knows me very well — having her in the pictures added this realness. I didn’t want them to feel too empty.


I felt that, in a way, after working on these crowd pictures for months and months in post-production, I felt like they kind of represented what was going on in our culture with social media and the media just feeling more connected than ever because of all of these tools that we have now that we’ve never had before for communication. But, in a way, it’s made us more disconnected than ever. We’re a very disjointed culture right now in terms of communication and one-on-one personal contact, which is how I want these crowd pictures to feel.


Maybe from far away they feel like really lively crowds with a lot of colors — and a lot of things going on and people talking — and the longer you stare at them, the more empty they start to feel.