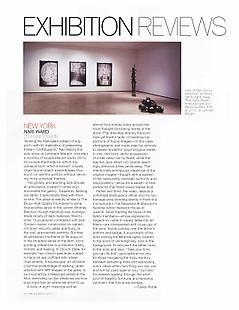 Tackling the multivalent subject of support – with its implication of preexisting threat – "LIVESupport," Nari Ward's first solo show at Lehmann Maupin, included a roomful of sculptures (all works 2010). All sustain the mode for which the Jamaica-born artist is knows: visually clean found-object assemblages that touch on identity politics without declining more universal themes.

The ghostly and alarming Sick Smoke, an ambulance covered in white vinyl, dominated the gallery. Topped by flashing red lights, it periodically filled with thick smoke. The piece is weirdly similar to the The Bruce High Quality Foundation's white hearse/ambulance in the current Whitney Biennial, though mercifully less nostalgic. Made mostly of dark materials, Ward's other 10 sculptures contrasted with Sick Smoke – some, constructed on slatted, roll-down security gates and hung on the wall, approached painting. But they all addressed the theme of life support, in the broadest sense of the term, incorporating references to protection, frailty, mobility and healing. In Church State, for example, two church-pew ends coated in black ink are outfitted with wheelchair wheels. Ambulascope, an all-black columnar assemblage of walking canes adorned with MRI images of the spine, is surmounted by a telescope aimed at the floor, reminding us that where we are now is as important as where we strive to go.

A suite of eight drawings and an almost four-minute video proved the most thought-provoking works of the show. The drawings employ the common yet fruitful tactic of blacking out portions of found images – in this case, photographic test cards used by schools to assess students' psychological states. In one, two boys vie for possession of a ball inked out by Ward, while the teacher, also inked out, stands seemingly oblivious a few yard away. The intentionally ambiguous meanings of the original images – fraught with a subtext of the relationship between authority and responsibility – allow for a wealth of interpretations that Ward wisely leaves fluid.

Father and Sons, the video, depicts a uniformed black police officer and his two teenage sons standing silently in front of a microphone in the Reverend Al Sharpton's National Action Network House of Justice. Shots framing the faces of the family members – whose expressions range from noble to bored, defiant to diffident – are interspersed with close-ups of the sons' hands running over the father's uniform and badge. A soundtrack of the sons reciting the Miranda rights, layered to the point of unintelligibility, runs in the background. At one point the father turns to the sons and says, "Take your time: you can do this": good advice not only for those navigating the tricky territory between remaining mute and expressing one's views when "anything you say can and will be used against you," but also for viewers wading through the whirlpool of fragility, fortitude and tentative optimism that this show evokes.