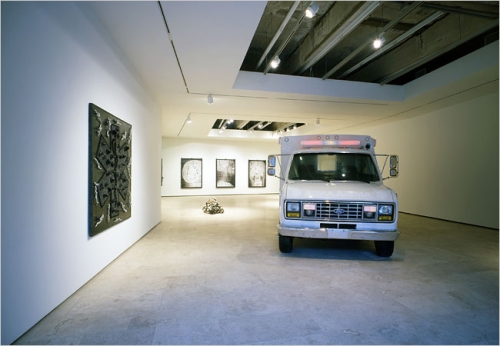 Is the art world having its own referendum on health care? There's an ambulance at the Whitney Biennial, by the Bruce High Quality Foundation, and another in Nari Ward's first solo exhibition at Lehmann Maupin.

Mr. Ward's ambulance is called "Sick Smoke," and contains a machine that fogs up the windows at regular intervals; it hisses ominously as the lights flash on and off. White vinyl conceals the lettering on the vehicle's exterior, giving it a ghostly presence.

Medical accessories also figure in several sculptures made with found objects, all with a vague, gnomic quality. In "Church State," Mr. Ward recasts black-painted church pews as collapsed wheelchairs. "Ambulascope" marries walking canes and a telescope to produce an overly technical-looking obelisk. Warhol meets Hammons in a set of magnetic-resonance images of skulls, painted on riot gates and festooned with shoelaces.

Mr. Ward is best known as a sculptor, but the show's most promising work is a short video in the back gallery. In "Father and Sons," filmed at the Rev. Al Sharpton's National Action Network House of Justice, a group of African-American teenagers and a police officer stand at a microphone in a room of empty chairs. There's not much action and even less talk, but the tension between the youths and various authorities plays out in a series of small, riveting gestures.

If Mr. Ward can find a way to channel this suspense and urgency into his sculpture, that ambulance might be going somewhere.