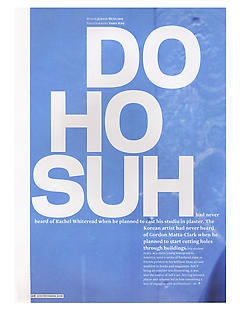 Do Ho Suh
By Justin McGuirk

Do Ho Suh had never heard of Rachel Whiteread when he planned to cast his studio in plaster. The Korean artist had never heard of Gordon Matt-Clark when he planned to start cutting holes through buildings. His student years, as a naïve young immigrant to America, were a series of forehead slaps as friends pointed to his brilliant ideas already manifest in books and magazines. But if being an outsider was frustrating, it was also the source of Suh's art. Moving between places and cultures led to him conceiving a way of engaging with architecture – or what he would call "space" - that was both his own and peculiarly appropriate to our time.

"That's the cruel reality for the artist, you have to know what's going on," says Suh, recalling his early efforts and sipping a long purple smoothie on London's South Bank. This is a rare trip to the UK for Suh, who lives between New York and Seoul and is only here to take down his installations in the Hayward's ambitious Psycho Buildings show. One of his pieces was a red nylon staircase descending through a red nylon floor suspended from the ceiling. The most beautiful work in the exhibition, it was also uncannily evocative. It felt familiar but also only half there, as though you were seeing a holographic apparition from your memory. It was clearly just one chapter of a story, and it made me want to find out the rest.

The staircase is an exact replica of the one that leads down to a basement flat Suh once lived in. It belongs to a series that includes nylon versions of his New York apartment and the traditional Korean family house that he grew up in. These are highly personal places, and yet they have the quality of archetypes. "I can't really detach myself from the private spaces and the personal experiences," says Suh, "but I learned that the audience was able to project their own personal experiences of similar styles of architecture. That was interesting, but I never intended it - I think it's all very self-indulgent."

What drives Suh to make these works is not quite homesickness, since there is never one home in his bicultural existence, but nostalgia. Recreating past homes appears to be cathartic, allowing him to release some of his attachment to them. "I had a mild fear of not going back to those spaces that I care about," he says. "You have to consume the whole space so that it can become part of you, but at the same time you can be totally free from it."

So are these soft buildings just outsized security blankets? In a way, yes, as they possess the one quality missing from a Matta-Clark or Whiteread installation: you can pack them in your suitcase. His nylon architecture is a remarkably nimble achievement in making the site-specific portable. It is the antithesis of all that muscular, monumental American art of the 1970S that was all about "being there". Suh's work is about not being there. Light, ghostly, feminine, it is the perfect analogy for an era of easy global migration, even, perhaps, for the virtual worlds we create on our screens.

Many architects have dreamed of such weightlessness. Since Mies they have relied on glass to dematerialise the building, but its porosity was always belied by a hard, cold surface. Suh's buildings have the softness of clothing. They are limp but not like a Claes Oldenberg sculpture - there is no loss of dignity. They are translucent in a way that evokes the paper walls of traditional Korean homes and the thin fabrics of traditional Korean costumes, but that translucency also signals the fact that they are not the real thing.

This is the crucial difference between Suh's work and architecture: his spaces are facsimiles. "In my world I don't create the space out of nothing," he says. "Because it is about the memory, I wanted to use a material that renders this idea of nothingness."
Why this fascination with architecture? It all seems to stem from the house that Suh grew up in, a traditional scholar's house built by his father, a renowned Korean painter. "Nobody really lives in that kind of house any more," says the 46-year-old, who is almost buddha-like in his chubby-faced, soft-spoken calm, "but the traditional house has a lot of layers. The walls and windows are all covered with translucent rice paper, and there is a very blurry definition of walls, with all the sliding doors. It's very porous. It's almost like camping: when you sleep in the house you share all the sounds of the outdoors, you see the shadows of trees or plants on your windows, so it's unclear whether you're in the building or not."

It is probably no coincidence that Suh's brother is an architect and that the whole family is obsessed with the topic. "Probably like 80 per cent of our conversation is about architecture and 20 per cent is about soccer - I think my mum knows more about contemporary architecture than I do," he says. The family has even made pilgrimages to tick off the works of gnomic Swiss master Peter Zumthor and Portuguese minimalist Alvaro Siza, both of whom he feels show affinities with Korean aesthetics.

If Suh's early surroundings were traditional, so too were his first steps as an artist. He started his career in the same vein as his father, using ink on paper. However, when he went to study at the Rhode Island School of Design, he accompanied his painting with classes in architecture and pattern making. "I think clothing was one of the starting points of my architecture projects, as it's a small habitual space for the person. Then maybe two or three years later I decided to make the fabric architecture."

What is interesting about these pieces is that though they are "about the memory", they are not created from memory. Suh revisits the sites and faithfully maps them with a laser measure. It is their accuracy that makes them so uncanny. Walking through The Perfect Home, a recreation of Suh's New York apartment, one recognises the proportions of the rooms and the layout of the bathroom from a thousand other New York apartments. What makes them more personal than archetypes is Suh's obsessive attention to detail. "While I'm measuring the space I use my tactile senses to disclose little marks here and there, and these bring a lot of memories," he says. Everything is passed on to seamstresses 7,000 miles away in Korea, who bring these places back to life.

The process of measuring and recording buildings turns Suh into something of an architectural detective. Fallen Star (2008) is a 1:8 model of the apartment building he lived in, in Providence, Rhode Island, with his father's house crashing into it as though hurled by a tornado - a metaphor for his sense of culture shock. But to make it he felt he had to understand everything that had ever happened to the 18th-century mansion house. "I got totally lost in the remodeling and renovation that was done to the building over time, so many things were done. I found that there is a staircase that goes nowhere. I tried to read something from the building's hidden histories."

Dividing his time more or less equally between two countries, Suh finds that he plays different roles in each. He exploits the anonymity of life in New York to think, while Seoul is for making. "It's very hard to think of new projects in Korea as it's a very old society and everybody knows each other, so you're trapped in a web of relationships." Yet it is a productive place. Suh employs 40 people in his studio, from sculptors to architects and product designers. Such studios are the market reality of the successful 21st -century artist: the garret has become the factory.

One of the reason's Suh employs so many people is that he is taking on increasingly ambitious work that requires a wealth of expertise. In one new project, he is building an imaginary bridge that connects Seoul to New York over the Pacific Ocean, with his house in the middle of it. His fetishistic quest for accuracy extends to him calculating the actual suspension limits, currents and wind forces that would act on the bridge, even though this is just a fantasy. "It's totally nonsense in a way, as you cannot really build a bridge over the Pacific Ocean, but I try to make things as much as possible believable," he says. "It's kind of like mad science."

The bridge recalls the radical architecture of the 1960s, like the continuous monuments of Superstudio. It's an interesting transition in scale. His previous explorations of cultural alienation have relied on the poignant resonance of human-based proportions - the feel of a corridor, the height of a ceiling. In a way this megastructure makes his back-and-forth transition between cultures much more literal. It's impossible to say whether anything has been lost for that, as the piece is still being made, but by definition a bridge is a compromise. "I have a quest of finding the perfect home," says Suh, and a bridge-house 3,500 miles from either of his real homes appears to be it.