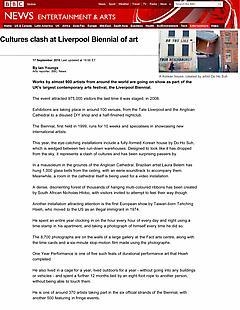 Works by almost 900 artists from around the world are going on show as part of the UK's largest contemporary arts festival, the Liverpool Biennial.

Exhibitions are taking place in around 100 venues, from the Tate Liverpool and the Anglican Cathedral to a disused DIY shop and a half-finished nightclub.

The Biennial, first held in 1999, runs for 10 weeks and specialises in showcasing new international artists.

This year, the eye-catching installations include a fully-formed Korean house by Do Ho Suh, which is wedged between two run-down warehouses. Designed to look like it has dropped from the sky, it represents a clash of cultures and has been surprising passers by.

In a mausoleum in the grounds of the Anglican Cathedral, Brazilian artist Laura Belem has hung 1,000 glass bells from the ceiling, with an eerie soundtrack to accompany them. Meanwhile, a room in the cathedral itself is being used for a video installation.

A dense, disorienting forest of thousands of hanging multi-coloured ribbons has been created by South African Nicholas Hlobo, with visitors invited to attempt to feel their way though.

Another installation attracting attention is the first European show by Taiwan-born Tehching Hsieh, who moved to the US as an illegal immigrant in 1974.
He spent an entire year clocking in on the hour every hour of every day and night using a time stamp in his apartment, and taking a photograph of himself every time he did so.

The 8,700 photographs are on the walls of a large gallery at the Fact arts centre, along with the time cards and a six-minute stop-motion film made using the photographs.

One Year Performance is one of five such feats of durational performance art that Hsieh completed.

He also lived in a cage for a year, lived outdoors for a year - without going into any buildings or vehicles - and spent a further 12 months tied by an eight-foot rope to another person, without being able to touch them.

He is one of around 370 artists taking part in the six official strands of the Biennial, with another 500 featuring in fringe events.

One recurring theme of the Biennial is putting exhibitions and installations into unusual venues.

Twenty-three artists are based in the former Rapid Hardware store on Renshaw Street, whose shop front is reputed to be the longest in the UK.

A group called Squat Liverpool has commandeered a number of empty commercial premises, including a nightclub that was left unfinished when its owners went out of business.

They have also set up Never Records, a mock record shop that only stocks vinyl that has been cut in the store itself.

Using microphones and a specialist vinyl-cutting turntable at one end of the "store", New York artist Ted Riederer has been recording musicians on the spot before giving them freshly-pressed 12-inch records of their songs.

Other installations include an adapted replica of the Liverpool FC dressing room by Daniel Bozhkov, a sculpture by Franz West that he says should be experienced while "sitting on, lying on and touching it", and 170 concrete manta rays that appear to swim across a ceiling.

The last Liverpool Biennial was held when the city was European Capital of Culture, and Liverpool has since been used by David Cameron as an example of how "cultural tourism" can boost a region's economy.

"Liverpool has come into itself as a cultural city," Biennial artistic director Lewis Biggs said. "It's been a long process but there's no doubt now that Liverpudlians recognise it as their own cultural asset, and it's become a destination for tourists from inside the UK and increasingly around the world."

But with public sector budget cuts looming, the festival is bracing itself for a financial struggle before the next edition in 2012. The Biennial receives funding from the Arts Council England, Liverpool City Council and the North West Development Agency, the latter of which is being scrapped.

"That's the worry for us - we don't quite know how to make good the gap in our finances that is opening up," Mr Biggs said. "But Liverpool is a very resilient city and we feel very confident that there will be many Biennials to come [that are] just as good as the ones we've done in the past.

"It's very difficult to do anything with no money, but creative people are good at doing surprising and wonderful things with not a lot of money.

"That's not an argument for cutting investment in the arts, because we know also that if you cut £1 of spending in the arts you lose £5 from the economy as a whole."