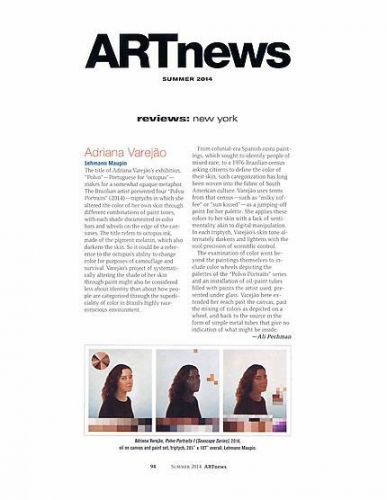 
The title of Adriana Varejão's exhibition, "Polvo" -- Portuguese for "octopus" -- makes for a somewhat opaque metaphor.  The Brazilian artist presented four "Polvo Portraits" (2014)--triptychs in which she altered the color of her own skin through different combination of paint tones, with each shade documented in color bars and wheels on the edge of the cavases. The title refers to octopus ink, made of the pigment melanin, which also darkens the skin.  So it could be a reference to the octopus's ability to change color for purposes of camouflage and survival.  Varejão's project of systematically altering the shade of her skin through paint might also be considered less about identity than about how people are categorized through the superficiality of color in Brazil's highly race-conscious environment.


From colonial-era Spanish casta paintings, which sought to identify people of mixed race, to a 1976 Brazilian census asking citizens to define the color of their skin, such categorization has ing been woven into the fabric of South American culture. Varejão uses terms from that census--such as "milky coffee" or "sun kissed" --as a jumping-off point for her palette.  She applies these colors to her skin with a lack of sentimentality akin to digital manipulation. In each triptych, Varejão's skin tone alternately darkens and lightens with the cool precision of scientific control.


The examination of color went beyond the paintings themselves to include color wheels depicting the palettes of the "Polvo Portraits" series and an installation of oil-paint tubes filled with paints the artist used, presented under glass.  Varejão here extended her reach past the canvas, past the mixing of colors as depicted on a wheel, and back to the source in the form of simple metal tubes that give no indication of what might be inside.