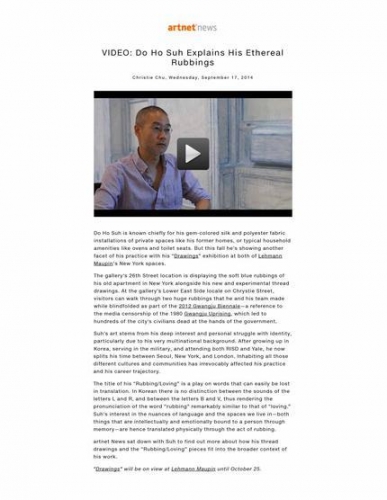 Do Ho Suh Explains His Ethereal Rubbings
By: Christie Chu


Do Ho Suh is known chiefly for his gem-colored silk and polyester fabric installations of private spaces like his former homes, or typical household amenities like ovens and toilet seats. But this fall he’s showing another facet of his practice with his “Drawings” exhibition at both of Lehmann Maupin‘s New York spaces.


The gallery’s 26th Street location is displaying the soft blue rubbings of his old apartment in New York alongside his new and experimental thread drawings. At the gallery’s Lower East Side locale on Chrystie Street, visitors can walk through two huge rubbings that he and his team made while blindfolded as part of the 2012 Gwangju Biennale—a reference to the media censorship of the 1980 Gwangju Uprising, which led to hundreds of the city’s civilians dead at the hands of the government.


Suh’s art stems from his deep interest and personal struggle with identity, particularly due to his very multinational background. After growing up in Korea, serving in the military, and attending both RISD and Yale, he now splits his time between Seoul, New York, and London. Inhabiting all those different cultures and communities has irrevocably affected his practice and his career trajectory.


The title of his “Rubbing/Loving” is a play on words that can easily be lost in translation. In Korean there is no distinction between the sounds of the letters L and R, and between the letters B and V, thus rendering the pronunciation of the word “rubbing” remarkably similar to that of “loving.” Suh’s interest in the nuances of language and the spaces we live in—both things that are intellectually and emotionally bound to a person through memory—are hence translated physically through the act of rubbing.


artnet News sat down with Suh to find out more about how his thread drawings and the “Rubbing/Loving” pieces fit into the broader context of his work.


“Drawings” will be on view at Lehmann Maupin until October 25.