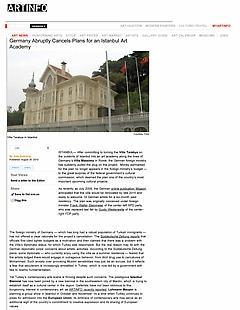 ISTANBUL— After committing to turning the Villa Tarabya on the outskirts of Istanbul into an art academy along the lines of Germany’s Villa Massimo in Rome, the German foreign ministry has suddenly pulled the plug on the project. Money earmarked for the plan no longer appears in the foreign ministry’s budget — to the great surprise of the federal government’s cultural commission, which deemed the plan one of the country’s most important upcoming cultural projects.

As recently as July 2009, the German online publication Migazin anticipated that the villa would be renovated by late 2010 and ready to welcome 14 German artists for a six-month paid residency. The plan was originally conceived under foreign minister Frank-Walter Steinmeier of the center-left SPD party, who was replaced last fall by Guido Westerwelle of the center-right FDP party.

The foreign ministry of Germany — which has long had a robust population of Turkish immigrants — has not offered a clear rationale for the project’s cancellation. The Süddeutsche Zeitung reports that officials first cited tighter budgets as a motivation and then claimed that there was a problem with the Villa’s diplomatic status, for which Turkey was responsible. But the real reason may lie with the German diplomatic corps’ concerns about artists’ activities. According to the Süddeutsche Zeitung piece, some diplomats — who currently enjoy using the villa as a summer residence — feared that the artists lodged there would engage in outrageous behavior, from illicit drug use to caricatures of Mohammed. Such anxiety over provoking Muslim sensibilities may just be an excuse, but it reflects a fear that secularism is increasingly embattled in Turkey, which is now led by a government with ties to Islamic fundamentalism.

Yet Turkey’s contemporary arts scene is thriving despite such concerns. The prestigious Istanbul Biennial has now been joined by a new biennial in the southeastern city of Mardin, which is trying to establish itself as a cultural center in the region. Gallerists have not been oblivious to this burgeoning interest in contemporary art: as ARTINFO recently reported, Lehmann Maupin is planning a group show in Istanbul in October and November. At a time when Turkey continues to press for admission into the European Union, its embrace of contemporary arts may serve as an additional sign of the country’s commitment to creative expression and its sharing of European values.